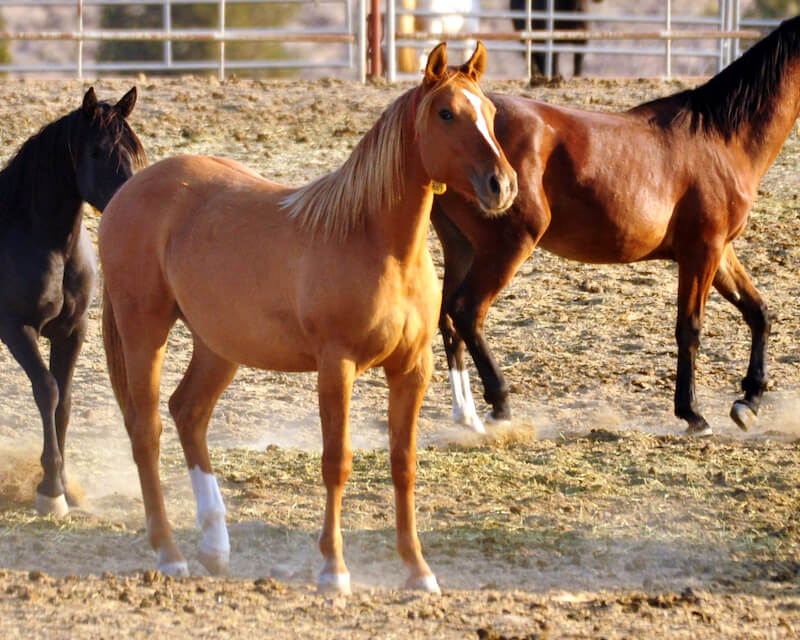 Or, How to Keep Your Wild Horse Safely at Home

My husband and I made the drive in late September to Southeastern Oregon.Our primary goal? To visit a couple of HMAs and get photos of wild horses. Naturally, we would also stop at the wild horse corrals in Burns, Oregon. To my utter dismay, he refused to haul the horse trailer along, even though we were driving my Dodge Ram. I knew I’d find a horse I needed to bring home, but for some reason he thought without a horse trailer that wouldn’t happen. He should have known better.

Once at the corrals, we both found ourselves at the fence with a dozen or more very friendly yearlings coming to visit.  Mike really liked a big, bay gelding, as did I, but then, out of nowhere, the heavens parted, choirs of angels sang, and the fairest of all the fillies in the land stepped forward. My heart skipped a beat. There she was, a beautiful red dun. And she was calling my name. There was little my husband could do to stop me. I was on a mission from that point forward. I managed to put together enough money to make a return trip to Oregon and pick up the filly I had begun calling Sensational Flirt. By the end of October I was back in Burns, loading up the pretty girl from Coyote Lakes.

I hauled Flirt home with another mare, Ebony. Ebony had been gentled a couple of years earlier, so she rode in the first stall inside my three horse trailer, while Flirt rode loose in the rear portion. Things went great all the way home, and both girls unloaded easily. The following morning, I loaded Ebony back up and began the drive with her to the barn where she was to live, completely unaware of the disaster unfolding back home.

Mind you, I’ve had mustangs for the past six years now. I’ve lost count as to how many have traveled through here, but I’d say a good 30-40, overall. Big and small, quiet and bold. Never have I had one that tested the boundaries quite like Flirt. We had just removed all but the last bit of wood (even what shows here in this photo was gone by the time Flirt arrived.) All that remained was the portion upon which I was sitting when I took this photo. When new horses came in, I’d always reinforce it with another 6′ panel, just because it made me feel safer. But for some reason, on this trip, I hadn’t. And wouldn’t you know, this was the horse that would send an entire equine community out in search of my missing wild horse.

When I pulled out with Ebony, Flirt decided she did not want to be left alone. My other horses were at a friend’s facility while I’d been away for the weekend. I’d planned on picking them up after dropping off Ebony, but Flirt didn’t care to wait for companionship. She became frantic, smashing the center boards until they burst into pieces. She then charged the top rail; there are still hairs on it from where it must have met her chest or neck. Because it had been screwed on from the outside, and because of the force she hit it with, the board came off the posts and my wild horse was once again free.

My husband hadn’t heard the commotion from inside the house, but when he went outside an hour later he quickly saw that there was a problem. He called me immediately, but of course by now Flirt was nowhere to be found. I notified the local animal shelter and the radio stations. I sent emails to the Back Country Horsemen in our area, and I started a Facebook page called Find Flirt. Hundreds of people followed our story, the daily search, the tears of frustration, the joy of unknown people coming out to help. It was amazing how many people took up the cause. The Heritage Flight Museum even took out their P-51 Mustang and flew over the hills and valleys of our region. While it was very cool to know they were up there searching for my mustang with their Mustang, there were no more sightings from the air than from the ground.

Our region is considered a temperate jungle. While our winter weather is colder than what most would associate with a jungle the underbrush is just as thick. We spent several days walking through people’s backyards and up old logging roads in the region.  ne afternoon, five days after Flirt disappeared, a friend of mine came out to search. And on that day, just 1/4 mile from home in an area that we’d already searched, Flirt was spotted. She didn’t stick around, even though we brought in a couple horses and set up panels in hopes of her hanging out with them.

The cavalry arrived a couple days later in the form of two BLM employees and a couple of their horses. Wrangler Wendy and I rode up where Flirt was last spotted, still finding no tracks or fresh manure. In fact, only one pile was found, which we thought especially odd. Eventually I suggested we head over past the old homestead, which I’d not thought she would have crossed through since there were buildings and a huge bog. But it was after crossing that bog that we once again spotted my wayward mustang. She saw us, too, but stood as though a statue, hiding in the trees. We turned and left, hoping she’d be there the following day.

The next morning we returned to the place Flirt had been spotted armed with a dart gun and tranquilizers. Thankfully the filly was found where we’d left her and it didn’t take long for Wrangler Wendy, the marksman, to pop a couple darts into her backside. Once groggy, she had a crash course in halter breaking and we led the wobbly girl out through the neighbor’s property (thankfully we had a back way out, so she could avoid navigating the bog on drugs). She loaded right up into the horse trailer and within minutes was back home.

People often wonder why they need a six foot fence for mustangs, or why the enclosure needs to be so sturdy. Horses like Flirt don’t come along very often, but when they do you’d best be prepared. And while my wood fence fell under regulation requirements for horses 18 months and under, it obviously wasn’t enough to stop the filly who wanted out. Thankfully this unexpected adventure had a happy ending, with Flirt home safe and sound.

Tracey Westbury grew up in the Pacific Northwest where she spent many years trail riding and hauling to horse shows.  She was in her mid-forties when she got involved with wild horses, and has since competed in two Extreme Mustang Makeovers and gentled many mustangs for herself and others.