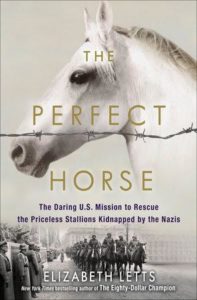 In the chaotic last days of WWII, a small troop of battle-weary American soldiers captures a German spy and makes an astonishing find—his briefcase is empty but for photos of beautiful white horses that have been stolen and kept on a secret farm behind enemy lines. Hitler has stockpiled the world’s finest purebreds in order to breed the perfect military machine—an equine master race. But with the starving Russian army closing in, the animals are in imminent danger of being slaughtered for food. With only hours to spare, one of the Army’s last great cavalrymen, American colonel Hank Reed, makes a bold decision—with General George Patton’s blessing—to mount a covert rescue operation. Racing against time, Reed’s small but determined force of soldiers, aided by several turncoat Germans, steals across enemy lines in a last-ditch effort to save the horses.

Elizabeth Letts introduces us to an unforgettable cast of characters: Alois Podhajsky, director of the famed Spanish Riding School of Vienna, a former Olympic medalist who is forced to flee the bomb-ravaged Austrian capital with his entire stable in tow; Gustav Rau, Hitler’s imperious chief of horse breeding, a proponent of eugenics who dreams of genetically engineering the perfect warhorse for Germany; and Tom Stewart, a senator’s son who makes a daring moonlight ride on a white stallion to secure the farm’s surrender.

Available from Amazon and many other booksellers.

Elizabeth Letts, author of The Eighty Dollar Champion, captivated me with this well-written and compelling account of the rescue of the Lipizzaner horses during World War II. Both horse lovers and history buffs will enjoy it. I found it an exhilarating page-turner and an inspirational story of courage and sacrifice. Put it on your holiday wish list!