April and I have been on a journey of healing. April’s Navicular and my sanity after dealing with the aftermath of Mark’s stroke has been a long road. While we’re both improving the process is slow. I’ve had to learn to celebrate the small victories. Waking up every day, I’m grateful for another day to learn, grow and revitalize.

Part of April’s rehab is consistent exercise. While I’ve been a bit lax about doing this daily, we’ve managed to make certain activities a priority. One of my favorite evening outings is the Seasoned Cowgirl’s night at Allison Trimble’s, hosted by Constance Scharff. While we really accomplish nothing other than riding around at a lazy pace and visiting, it’s a great time to decompress, share our woes and celebrate the wins. Followed by a simple potluck we have managed to make this a priority.

I’m not as determined to hone skills on horseback and start getting ready for competition but more about horse time. It has been a huge factor in my stress reduction and healing. While Mark’s condition has improved he will never be the same as he was. He doesn’t have the stamina he once had, tires easily and is many times at a loss for words. I’ll take the fact he’s still here and with me but life is very different. The added burden of household responsibilities, added work, caregiving and managing a business are sometimes overwhelming. The help and support of many people have made the transition bearable. We are truly blessed. 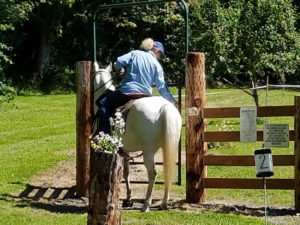 I’ve managed to carve out a little horse time. A couple of weekends ago I attended a show at Fire Mountain Trail Course. April shined, winning her division at the show, certainly more than I expected. The real win was being able to ride her again. She was foot sore after riding more than a mile on gravel road but it’s going to be that way until she rebuilds her sole. After being shod for most of her life the rebuilding process is not going to happen overnight.

I never imagined going to hoof boots and barefoot but I’m starting to be a believer. Watch for my write up in the October issue on 3 different brands of hoof boots and the process of trimming and some tools that really help. Meanwhile, thanks to all of you who have helped me on this journey. There are too many to list. You know who you are. I love you guys!

Quote: Gratitude is the open door to abundance. ~Yogi Bhajan