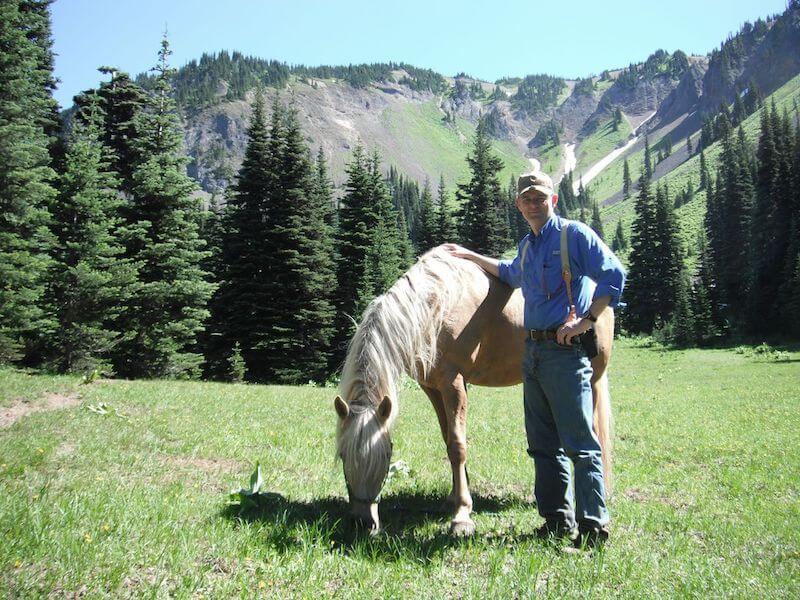 Keeping a trail horse is expensive—the feed, fuel to travel (even worse) and tack, well we’ll just avoid the subject of how much good equipment costs. So why do we ride? And, more to the point, why do we trail ride over questionable terrain, through poor weather, and at great expense, when there are perfectly good arenas with excellent footing scattered across the country?  Of course, I can only answer this question from my own perspective and to do so I’d like to paraphrase lyrics from a favorite horseman’s campfire song, Night Riders Lament:

They’ve never seen the hawk on the wing,

The words in this very meaningful verse speak to the remarkable sights and experiences that an attentive trail rider can, and will, encounter. Some riders may enjoy mastering the precision movements and synchronicity of horse and man in the art of dressage; others may find the newer sport of competitive trail rides as compelling as the much older and thrilling chase of the fox and hounds. I find that the backcountry offers plenty of competition as my mount and I rise to the challenge of arriving safely in camp before night falls after a long day on precipitous mountain trails.

Thrills, too, can be experienced by the trail rider in unexpected encounters with other trail users (both human and wildlife), trail obstacles, and a myriad of other “eventualities.” Indeed, the “just a trail rider” utilizes aspects of every competitive equestrian sport that has been devised from dressage to western pleasure, endurance, and many other sports. The trail rider is competing in a myriad of disciplines all at once and in an “arena” with constantly changing footing, weather and seasons. The trail rider’s trophies for competing in this “sport” are far more than a mere ribbon or tchotchke to hang on a stable wall, they are transcendent and life changing for those intrepid enough to brave the trails less traveled.

While seeing the northern lights is certainly a pleasure, so is watching meteor showers from a snug camp tucked beside an alpine lake in a remote mountain meadow. To see the night sky alight with fire and stars is a luxury one rarely finds in an arena. Conscientious riders may see not only the hawk on the wing, but perhaps even a distant coyote pursuing dinner, bears fresh from a long winter’s snooze gorging themselves on berries, or a trout languidly swimming in the crystalline waters of a mountain lake. In short, trail riding is conversing and interacting with Mother Nature as she determines what surprise trail obstacles you’ll partake in.

While spring in the great divide is certainly grand, trail riders near the Cascade Range have an enviable choice of seasons by merely adjusting their elevation. Even well into the summer months, mountain riders can pick their season. I’ve often started a trip with summer’s sultry temperatures at the trailhead giving way to coolness and a show of colorful early spring flowers as I climbed further into the high country. Nor is it uncommon for an August trip to become a winter’s expedition as we make our way through lingering snow fields in route to a long forgotten cabin or bursting waterfall. The memories of finding these treasured hidden gems are as wonderful as any bauble won in a competitive trail ride.

As far as an old camp cookie’s singing, well, I can’t think of many things that make me more pleased after a good day in the saddle than hearing a campfire crooner. Cowboy songs from olden days echoing off surrounding trees and reflected in the glowing embers of a fire are reason alone to venture into the back country this summer. If you have the chance, depart from the world of artificial trail courses and arenas to let the wilderness test and judge you with her own brand of competition. You’ll find the prizes are tremendous, and the memories that you’ll cherish unforgettable. All of these experiences are what makes trail riding in the backcountry the highlight of my equine life. These are the reasons I ride the trails, what are yours?