The Excellent Adventures of Spanky and Dally 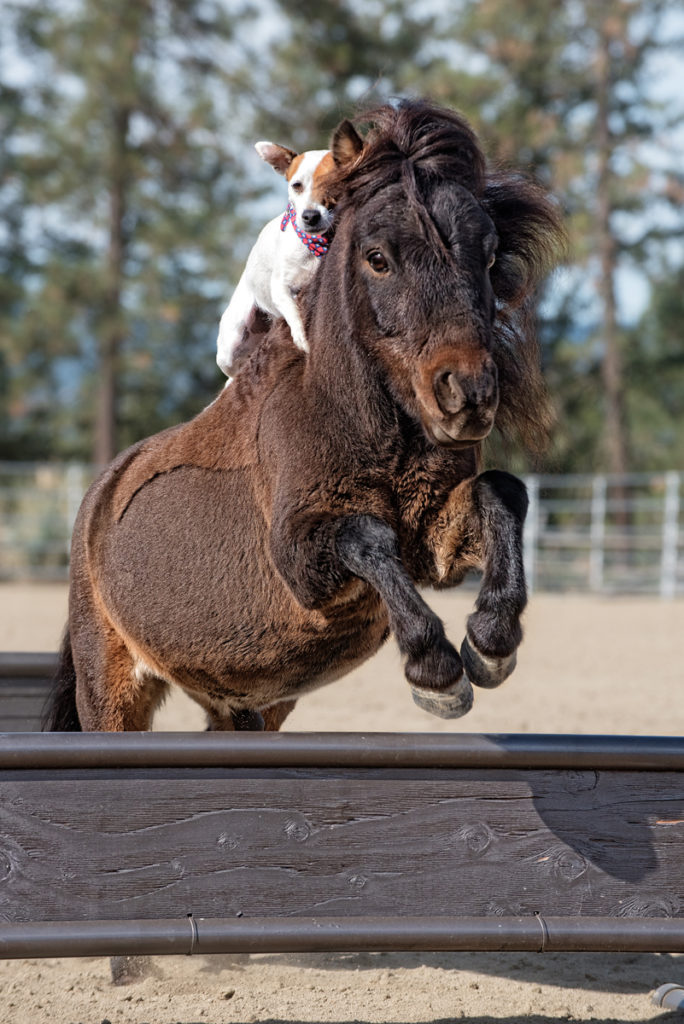 They have become a crowd favorite at horse expos in the Pacific Northwest and beyond: the tiny brown pony named Spanky and his friend Dally, a Jack Russell Terrier. The Northwest Horse Source wanted to find out more about this dynamic duo so we asked trainer Francesca Carsen to fill us in.

What is your background with horses?

I grew up around horses in England.  Once in the US I wanted  a Quarter Horse and  I showed in mostly hunter, trail, and western pleasure.

Do you have specific experience training animals?

I have been Steve Rother’s assistant at clinics for over 10 years in both the USA and Canada, helping hundreds of owners achieve a better partnership with their horses. Working with so many different breeds, with different issues, has taught me more than I could have imagined. I have also started and trained a number of my own horses. Steve has been my main mentor, but I am lucky enough to also spend time learning from other great horsemen.

When and why did you get a miniature horse? Was the idea always to develop an act?

Spanky was a 2-year-old stallion when we met him. His owner begged us to take him. He was aggressive and very overweight. For a long time, having him in an act was not even a remote thought.

Describe Spanky’s personality and your relationship with him.

Anyone that knows Spanky will say that he is the quintessential “naughty pony.” I actually believed I could change his personality until about 7 years ago when we did our first big show at the Northwest Horse Expo. I was so excited and had practiced very hard. When he blew by me at a speed I had never before witnessed, I realized I couldn’t change his personality. He ran full tilt for the next 5 minutes, thoroughly enjoying himself with Steve in full pursuit on horseback. From then on I realized that I had to let him run at the start of every show. Instead of trying to change his personality we now show it off to the crowd and they thoroughly enjoy it.

Where did you go, in the beginning, for information on trick training?

Steve Rother was my mentor and inspiration for education. I would watch Steve’s trick training DVD over and over, as well as the liberty DVD (which I wish we’d had when I started with Spanky).

What was it like at first, frustrating or fun?

I would say that it was 80% frustration and 20% fun. However, those moments where something would click made it all worthwhile. 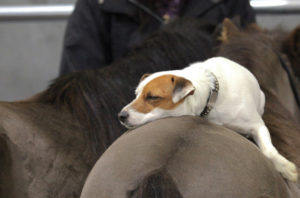 What has been your biggest challenge in developing this act?

Anyone that works (in or out of the home) knows how challenging it can be to find the time at the end of the day for horse training. I take care of Steve Rother Horsemanship (along with Steve), which often means sitting at a computer for 12 hours of the day, 7 days a week. We are also gone a lot so I would sometimes not be able to work Spanky for weeks. My biggest challenge was having the act great at home and then having it fall apart at a big show with all the distractions (loud music, crowds, other horses, banners, etc.). Like any show horse, Spanky would know when it was a real show and suddenly become the naughty pony. On the Letterman show last year I practiced the jump in the house (on stall mats) to get him used to a small stage. I had never done the trick in public so it was nerve wracking. However, nothing could quite prepare Spanky (or me) for the huge audience, bright lights, heat (he walked in from an outside temperature of 16), band, rolling cameras, blue floor, wrong placement of jump… not to mention David Letterman rubbing his butt! Even though Spanky did not jump the first time (which was funnier than the jump itself), because of all the prep work we had done he held it together, instead of running out the stage exit.

Do the animals enjoy it? How do you know?

It’s pretty easy to see that they enjoy it. They are loose and can run off at any time if they wish. I think they love having a job and feel a sense of accomplishment (most of the year they just hang out in a big pasture). And they can feel the excitement of the crowd. Dally absolutely LOVES the shows. The louder the crowd the better. Anyone who has ever had a loose Jack Russell knows how hard it can be to keep them focused.

What is the advantage to trick/liberty work with horses and would you recommend it for riding horses as well?

I would absolutely recommend it for riding horses. A horse that is nervous and sensitive can really learn to relax when laid down, as well as learn to trust the handler. Sometimes people have injuries that prevent them from riding, so working at liberty and teaching tricks keeps the horse focused and engaged. It is a great change of pace and cross training keeps a horse from becoming sour and bored with the same old job every day.

What is the hardest trick to train?

The hardest trick is to have a consistent cue (that the horse responds to every time) and have the horse “hold” the trick until released. Even though we use the word “trick” I think of them as maneuvers, just like teaching a spin or a stop. It takes repetition and focus.

We rescued a second miniature horse, Jet, a few years ago. I did not make the same mistakes with him that I did with Spanky so he is an honest citizen in the show ring. They are polar opposites. 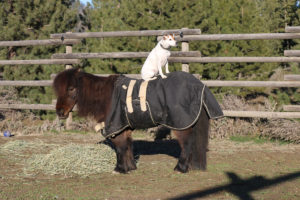 Do Spanky and Dally have a true bond or do they just work together?

They definitely have a bond. We have cattle dogs that work with the horses, but there is no bond between them. Spanky allows Dally to ride him and he is happy to have her lay on him. Dally adores Spanky—kind of like a younger sibling, but they sometimes bicker about who is boss.

What’s next for you, Spanky and Dally?

We went to Hollywood in January of this year where Dally, along with Spanky, won the “golden fire hydrant” at the World Dog Awards. This was amazing as they were up against some extremely talented dogs.

The National Geographic series Unlikely Animal Friends comes out this spring and features Spanky and Dally. They came to the ranch to film which was exciting. There is also a crew coming over from England to film in the summer (for The Secret Life of Dogs). Later, in September, a book is coming out featuring the pair called Unlikely Friendships. My Spanky and Dally coloring book is now available (at horseteacher.com) and I will be publishing a kid’s book this fall called The Great Adventures of Dally and Spanky.

Francesca Carsen is the owner and trainer of the famous dog and pony duo: Dally and Spanky. Francesca has been teaching horsemanship (specializing in the art of liberty) for over 10 years. Both her and her animals have appeared on the letterman show in NYC, been featured on animal planet and Nat Geo TV and won at the ABC world dog awards in Hollywood. They have performed at Breyerfest in Lexington (where Dally & Spanky were made into Breyer models), International jumping shows in DC and CA and horse expos throughout the US and Canada.
Their movie “Adventures of Dally & Spanky” by Sony Pictures was released Sept 10 and is available on DVD (Amazon and Walmart) and digital download (Amazon and iTunes). Their kids book: “The Great Adventures of Dally and Spanky” is available through Francesca or on Amazon.