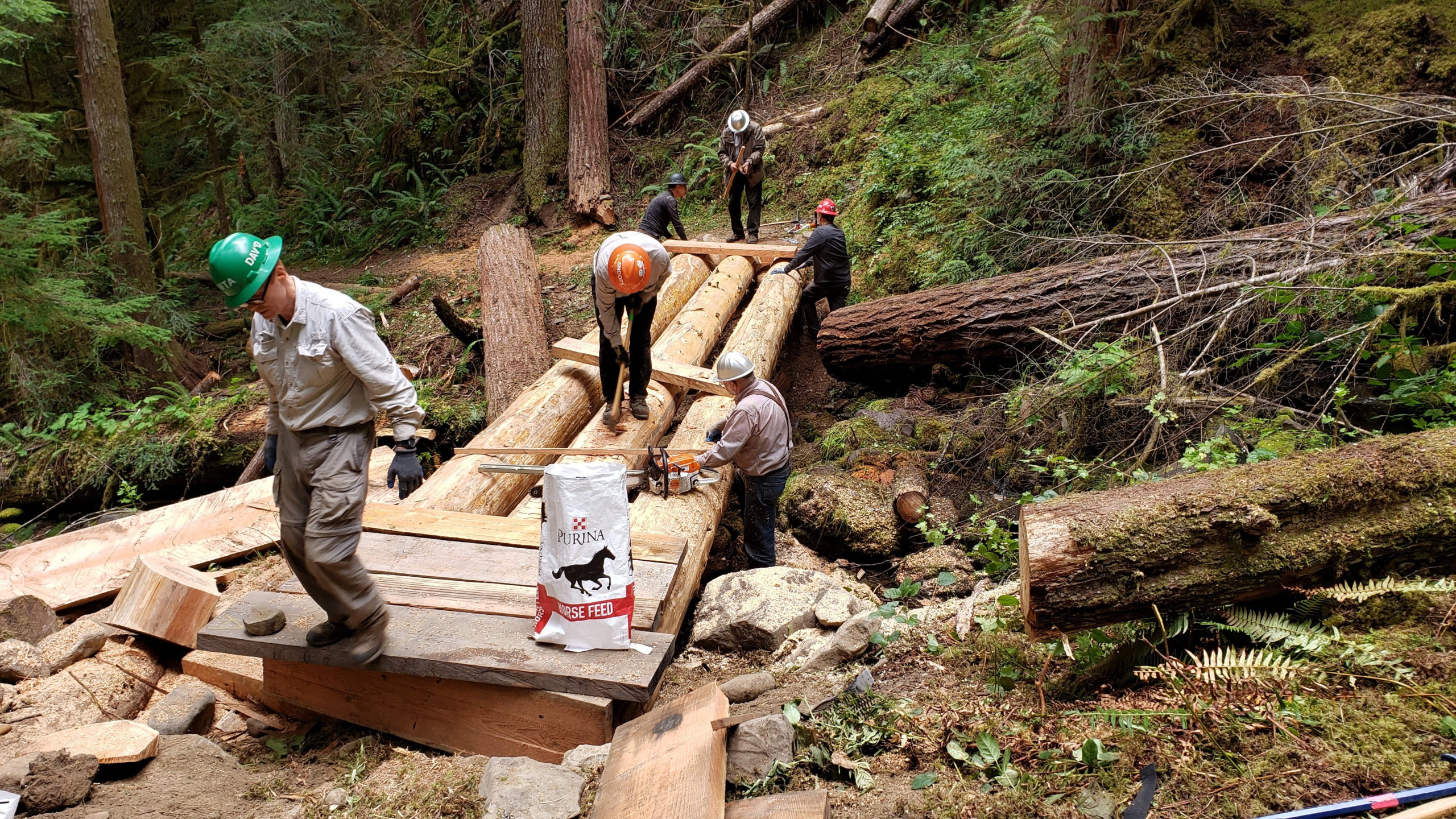 Last August, the BCHW Peninsula Chapter completed the rebuild of a 35-foot stock bridge along the Slab Camp Trail #838 located in the east side of the Olympic National Forest. This project was the culmination of about two years of planning and work.

There is no recorded history of the bridge that was replaced. Most of the trails and roads in that area existed in the 1930s. Those who dismantled this bridge reported that it was of very old construction. The cedar decking was held down with square nails/spikes and the stringers were attached to their sills with round rods.

The bridge was identified as failing two years ago as part of a two-year RAC grant proposal assembled by Rod Farlee. The planks for the bridge decking were cut from Douglas fir trees that fell at Dungeness Forks Campground in a windstorm in 2018. The contractor bucked them to the length we needed and hauled them to the Quilcene Forest Service Yard. There, the Gray Wolves trail maintenance crew used our Alaskan mill over the summer of 2018 to saw the planks. Del Sage, Peninsula Chapter vice president, hauled them to his place for storage and then to the trailhead as needed.

Multiple pack trips using horses and mules to pack the planks to the job site were made by chapter members starting in November 2018 and continuing through spring and summer of 2019. Each mule or horse could pack two planks along the 2.5-mile switchback trail down to the job site (elevation loss of about 1,000 feet). Two trips were needed to fell the huge cedars that became the stringers for the bridge. A total of 35 planks were hauled. Some members rode in while others led their pack animals on foot.

The final construction of the bridge took place August 16-20, 2019. A crew of about 25 adults and 15 Boy Scouts rode or hiked to the job site, packing all of the tools needed to do the job with the help of mules and horses. Two trips, using four pack mules each, were needed to get all the equipment in place. They carried in (and out) 1,000 pounds of rigging gear. Most workers and stock camped at the trailhead during the four days of construction and traveled to and from the site each morning and evening. Some camped near the bridge site.

The old bridge was removed, saving the siderails, which were still good. Peninsula Chapter crew leaders Del Sage and Tom Mix, along with BCHW volunteers, used an elaborate rigging system and a chainsaw winch to move the three huge cedars (35 feet x 23 inches, midspan) into place on the existing bridge sills. Once those were in place and leveled, the planks were drilled and nailed down and the siderails re-mounted. The Olympia Mountaineers (who learned chainsaw techniques from our BCHW trainers) sent a crew of about ten to assist and learn how rigging is used to move things when building trails.

A Boy Scout earned his Eagle rank by doing his project notebook on the bridge and securing donations of decking spikes and food for the crews. He was joined by nine Scouts and two leaders who helped on the project. Rebecca Wanagel led a WTA crew that helped with the building too. This new stock bridge should last for many years!

Please help support BCHW when you shop on Amazon Smile (it does not cost you extra!). Choose Back Country Horsemen of Washington as your charity at smile.amazon.com. smile.amazon.com/gp/chpf/dashboard/ref=smi_se_ssr_btnr1_setch?ie=UTF8&pldnNewSubDash=1