Where Winners Run in the Family 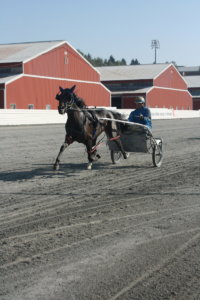 For Cal and Shelley Nyuli, owners of SciencePure Nutraceuticals, good things come in threes. On the evening of September 1, track history was made when three related pacing Standardbred mares, owned and bred by the couple, won races at Fraser Downs in Surrey BC, Canada. The sisters, PureForm Athena, Pureform Aurora, and PureForm Goodtogo, all out of a Cams Card Shark mare, Chewy Hanover, won their respective one mile races. This rare occurrence reflects not only fine breeding, but exceptional health and wellness uniquely available through SciencePure.

For Cal, and especially Shelley, horses have always been an important part of their lives, as sure a passion as the couple’s dedication to health and nutrition. Both native Canadians have competed in bodybuilding and hold titles in the sport. While the focus on body building eventually transitioned to company building—SciencePure was birthed in 1997—the role horses played in their lives personally and professionally kept growing.

“There was always a desire to have horses,” says Shelley, remembering a childhood in Alberta as a backyard owner and rider. While Cal had less direct exposure, horses were a feature in his family as well. Early on, the couple dabbled in the world of Thoroughbred racing but eventually were drawn to Standardbreds.

“What drew me to the Standardbred were the horses themselves,” says Shelley. While she loved the look of Thoroughbred and Arabian type horses, she couldn’t resist the hardier frame and more reliable temperament of the Standardbred. 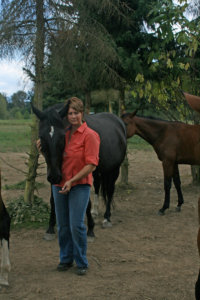 She and Cal bought their first Standardbred in 1998 and Pureform Farms was established. For the last 14 years the couple has been breeding Standardbreds, owning a few broodmares and a stallion, Valet Victory. Regardless of being sired by famous trotter Valley Victory, this stallion loves to pace and the Nyulis have put some 50 pacing foals on the ground and raced an unheard of 85% of them.

The world of Standardbred racing is a tough one, especially for the horses. Training begins in the spring or summer as yearlings. Usually 50% of 2-year-olds are racing lightly. By the end of their 3-year-old season, about 65% of a given generation of Standardbreds that will make racehorses will be on the track. The percentage of horses that continue to race at 4 and beyond drops dramatically to just 25% by the end of their 5th year. Some are simply no longer talented enough to be competitive, but suspensory ligament injuries and other joint/leg/foot related injuries are common. For many owners and trainers, the solution is simply to buy or breed another horse. Not so for Cal and Shelley Nyuli.

“The longevity of the horse is our concern,” says Shelley, who says Pureform Farms has maintained a goal of long term soundness.

In 2005, the Nyulis bred 7 mares, producing 7 foals: all 7 have won at least 1 race, and last spring all were racing and competed as 5-year-olds on the same weekend at Fraser Downs. Six of the 7 were still racing this year in the spring meet. Indeed, Pureform Goodtogo is 7 and another horse is still going strong at 9 years of age. What makes the difference? Good breeding aside, Shelley points to a careful program of nutrition and management practices. The Nyuli’s broodmares are fed a multivitamin, mineral, and connective tissue support product called Support One. Foals will use the same supplement along with the mother’s grain from birth and continue it after weaning and until they begin training. Horses in training all receive Performance One, a product also popular with barrel and cutting horses. The September 1 victories of Chewy Hanover’s offspring were helped by a triple product supplementation of SciencePure’s finest: Performance One, Glucosamine Plus and Curcuzone, a product containing ingredients with anti-inflammatory properties.

“They (the horses) are athletes; they need to get the edge,” says Shelley. “Supplements give them that edge.”

Despite the Nyuli’s success putting healthy horses on the track, they are downsizing their breeding program.

“Our goals are changing,” says Shelley.

What isn’t changing is the Nyuli’s focus on giving horses—all horses—a healthy edge with SciencePure products. And they won’t abandon the breed that has given them years of pleasure.

“I will always have a Standardbred,” says Shelley.

For more information about SciencePure visit them at www.sciencepure.com or call the company directly at 1-877-533-9163 to discuss how to give your horse an edge.