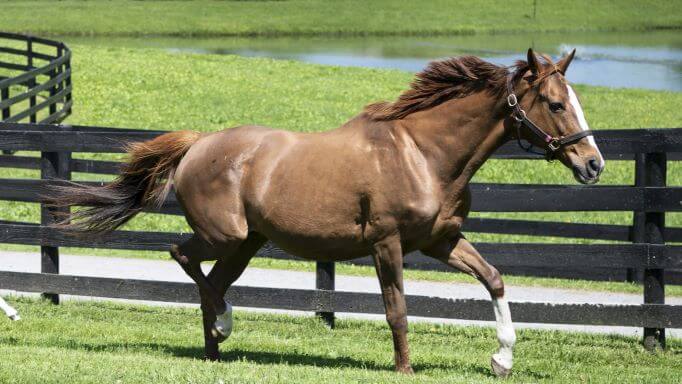 Repeta, a 12-year-old Kentucky-bred mare owned by Three Chimneys Farm, delivered a filly by Three Chimneys freshman stallion Volatile at the farm in Versailles, Ky., at 8:38 p.m. on April 1. The foal was the fourth this season for the Foal Patrol program, the popular webcam series from the National Museum of Racing and Hall of Fame that is now in its fifth season.

The delivery went smoothly and both mare and foal are doing well. Repeta is one of five mares participating in Season 5 of Foal Patrol. The filly by Volatile is Repeta’s seventh foal. The unraced mare has already produced four starters, including three winners.

Previously this season, Traveling Tiger at Safari North Farm at Pauls Mill delivered her filly by Audible in January; Spanish Bunny delivered her colt by Uncle Mo in February at Gainesway Farm; and Elate delivered her colt by Speightstown at Claiborne Farm in March. The fifth and final mare this season is Floripa, who is in foal to Vekoma at Old Tavern Farm in Saratoga Springs, N.Y., with a May 5 expected due date.

Foal Patrol is a one-of-a-kind interactive web project of the National Museum of Racing and Hall of Fame that debuted in 2018. Programming includes a collection of live cameras where people can view real-time streams of in-foal mares, as well as numerous educational aspects on the educational site at foalpatrol.com/education. The live camera feeds will be available according to each horse’s daily schedule, set by the farm. For more information, or to sign up for news and special alerts, please visit foalpatrol.com/content/foaling-updates.

For more information about the National Museum of Racing and Hall of Fame, including upcoming events, please visit www.racingmuseum.org or call (518) 584-0400.