Using the principles in this 5-part series will give you the basics for evaluating your horse’s hoof health. It includes: Understanding Foot Falls, Identifying Distortion, Understanding the Sole Plane, What is Breakover?, and Load Sharing. In August we talked about foot falls and the importance of a heel first landing. This month we’ll discuss how to identify distortion—what does it mean to your horse and distortion from what?

Distortion is defined as any excess growth of the hoof wall which creates more mass (leverage) ahead of the center of the foot and less mass behind center. Distortion occurs when the length of the hoof wall extends beyond what is considered normal positioning around the coffin bone in a healthy foot.

Excess distortion is a result of three factors: (1) All feet distort simply because they grow; (2) Environmental influence that exacerbates the forward migration of the hoof capsule, i.e. a wet or soft environment; (3) A lack of understanding of the foot as it was designed to function, i.e. continually shoeing a distorted toe and saving heel. 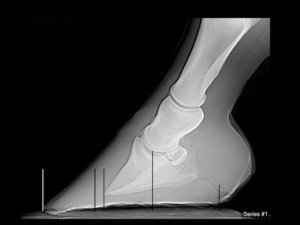 Leverage on the front of the foot is simply due to the fact that the hoof wall grows in length. As the horn grows, the result is not only vertical but also a horizontal extension of the toe, which creates a leverage force that works against the equilibrium of the coffin joint, creating strain on the tendons and ligaments around the joint (Think, working in ski boots or snow shoes). In sound feet, and on feet that are maintained in a healthy natural environment, we find more weight bearing mass behind center and less mass ahead of center to breakover. As we compare this picture of sound horses vs. horses that are struggling with lameness issues, we continually find that these balance ratios are reversed (more in front and less behind).

Most prominent researchers of equine hoof disorders readily agree that excess leverage on the front of the foot will lead to predictable lamenesses. Not “might” or “maybe” but will.  It’s just a matter of time. We have lost sight of what “normal” really is. Conventional farrier science has focused on shortening the front of the foot through the sole and saving heel in an effort to achieve hoof pastern alignment. And while alignment of the bone column through the pastern and coffin joint is desirable, sculpting the sole and hoof wall to achieve this angle has proven detrimental to the overall health of the limb. Now that we understand the importance of proper equilibrium around the coffin joint, we need to adjust our picture of what we think of as “normal.” We must focus instead on the balance parameters around the coffin bone within the foot, specifically referencing center.

How do we find center? Here is an easy way for you to evaluate your own horse for distortion: Looking at the solar surface, or bottom of the foot, we find the widest part of the foot. This will coincide with the center of articulation of the coffin joint and will be roughly 1” back from the frog apex (average size foot) and also where the bars blend in towards the frog and collateral sulci. This is where we draw our first line. 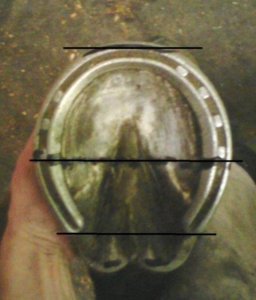 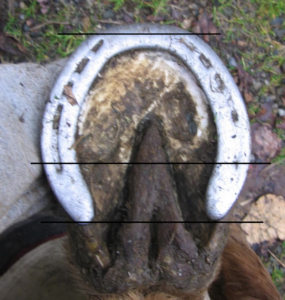 The back of the foot is “more” (from center to posterior support) and from center to breakover (as dictated by the rolled toe and higher inner rim) is “less.” 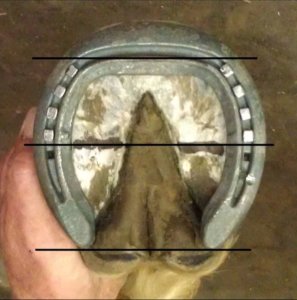 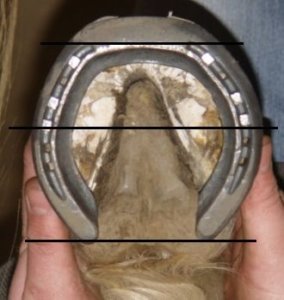 Once we have identified center it’s important to understand that the most posterior weight bearing anatomy on the bottom of the foot should be, and needs to be, the frog buttress (this is where the heels of the shoe should be placed). Without engagement of the frog buttress, proper support of the internal structures of the foot cannot be accomplished. In a shod horse the heel of the shoe defines posterior support. In a barefoot horse it’s the frog buttress. Draw your second line where the heels of the shoe ends or across the frog buttress. Your third line will go at the leading edge of the toe, or wherever the toe is allowed to roll forward, or “break over.” Breakover is defined as the pivot point for forward movement and is variable, depending upon shoe style or trimming techniques (more on that later).

Ideally, we’d like to see more weight bearing mass from center to the back of the foot and less weight bearing mass from center to breakover. Skilled farriers can modify all types of shoes to offer improved equilibrium and attain better anterior/posterior balance; however, there are many shoes on the market which are designed to regulate distortion by reducing the leverage on the front of the foot. In fact, every major manufacturer now produces a shoe designed to improve the equilibrium around the joint through a built-in breakover advantage. You can’t just lop off the toe. It’s important to understand appropriate hoof preparation. Understanding the Sole Plane will be discussed in October and, specifically, how to deal with distortion in the November issue in What is Breakover?

Proper trimming and shoeing preserves the integrity of the sole, while addressing leverage by reducing the distortion on the front of the foot.

Mark Plumlee is a Certified Journeyman Farrier through the American Farriers Association, a Registered Journeyman Farrier through the Guild of Professional Farriers, and a Certified Barefoot Trimmer, Certified Farrier and Certified Lameness Specialist through the Equine Lameness Prevention Organization. These diverse certifications speak to Mark’s commitment to the horse. Mark has published 6 educational DVDs, and has been a pioneer in the advancement of farrier education for over 20 years. Mark, with his wife Karen own and operate Mission Farrier School in Snohomish, Washington, where they have graduated over 400 students from across the United States and 10 foreign countries.