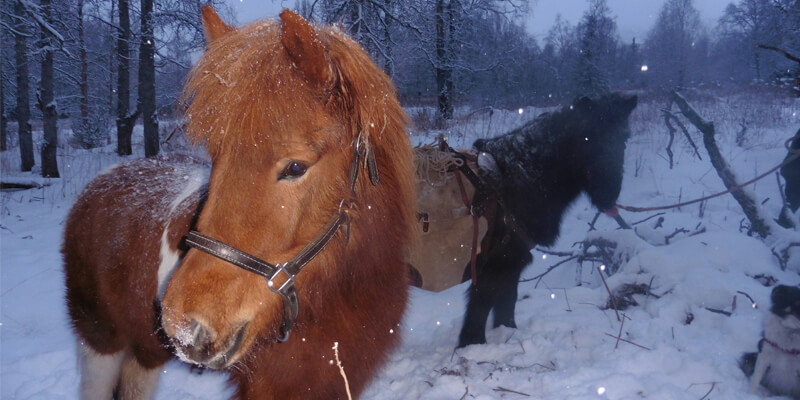 The phrase “to eat crow” brings to mind the image of an individual, fork and spoon in clenched fists, white napkin tucked under chin. Before him on a plate is a cooked crow, claws facing upwards. The phrase means to acknowledge a blunder. The following story is about a mistake I made with my horses and the resulting lesson I learned.

Not long ago my husband, Pete, and I decided to take two of our four Icelandic horses for a walk on area trails; Tyra, age 3, and Hrimfara, age 4. Our other horses are Tinni, age 27, and Raudhetta, age 14.

Pete and I live in Southcentral Alaska on the edge of the Matanuska Moose Range which is state land. The area is extensive, so we seldom encounter other recreationalists in the winter. Letting either of our young Icelandics run free is a fairly safe proposition. When one is on-lead the other remains within eyesight. Hrimmi was loose. I unclipped Tyra, thinking that the two would have more fun running free together.

I call Hrimmi “Moo Moo” because the pinto has cow-like markings and pounds the ground when she moves. And I call Tyra “Twinkle Toes” because the fire-red chestnut is light on her feet. The two raced a quarter mile uphill then spun around and faced me. I extended my gloved hand. They raced back to me for a treat. I hooked up Tyra and walked over to Pete. He nodded when I said that I’d never again let the pair run loose together.

On Christmas day Pete opted to stay inside and cook dinner, and I decided to take the dynamic duo for a walk. We arrived at the trailhead. Hrimmi stood quietly as I released Tyra. Two miles out we arrived at the far end of Peaches Loop (this portion of our interconnected trail system is named after our much-loved, deceased goat). I called Tyra. She galloped over to my side and came to a sliding stop. I unhooked Hrimmi and went to hook up Tyra. There was a gunshot; Tyra bolted and Hrimmi followed. The pair entered a stand of birch and were soon out of sight. I kept to the trail, for I couldn’t keep pace with them. I then hurried home.

I ran up our cabin porch steps, threw open the kitchen door, and yelled to Pete that the ponies were out on the trail. To his credit, he didn’t chide me. Rather, he removed the pumpkin pie and muffins from the oven and put on his winter gear. His questions merely dealt with the where, when, and how it happened.

We hopped in our pickup and Pete drove down our lightly-trafficked road. We hoped to meet up with Moo Moo and Twinkle Toes on the road. This was more than likely since Icelandics have an incredible homing instinct. For example, one fall Miki and Julie Collins’s two Icelandic horses ran off but returned home the following spring. What’s most impressive is that the Collins live in Lake Minchumina, a fairly remote area with little vegetation.

Pete pulled onto a side road. We determined that I’d cut across the field over to our trails. Pete would return home, saddle up Tinni (the old guy) and meet up with me. I grabbed one of our two lead ropes. If I caught one horse, the other would follow.

As I walked, I remained deep in thought. It was 3 p.m.; It would be dark by 4:30, which would slow our search efforts. We were scheduled to get together with friends at 5:00. Pete and I would bow out of the holiday plans to continue the search, both going on foot and using headlights.

All that could go wrong came to mind. Either pony might get a leg caught in a trap or downfall and break a leg. I’d once found a dead horse while out cross-country skiing. All that was left was a worn red halter and a pile of bones. Our ponies were both wearing nylon halters that might get snagged on a tree limb. And now that the creeks were frozen over, water sources were far and few between. They might also wander over to Quarter Horse breeder Ron Mistler’s place and fraternize with his stallion. Big stallion, large pony — bad combination.

I tromped across three iced-over creeks, stumbled through several downed trees, and circled spindly spruce, all the while scanning the area. A moving shape finally caught my eye. It was not the angular form of an errant moose, but rather the rounder form of a backyard pony.

“Found them!” Pete shouted back.

I ran the 100 yards to where Pete and the three ponies were waiting. Pete was astride Tinni. Tyra, on lead, stood next to him. Hrimmi, untethered, was standing behind her herd mates. I clipped the lead to her halter and buried my head in her thick, red mane. Pete had found the pair on the road – they were homeward bound.

Hindsight, as the saying goes, is 20/20. I’ll never again allow the two horses to run free at the same time. I’ll also follow their trail if they veer off the main trail. If I decide to unclip one horse and clip the other, I’ll tie the one that’s on lead to a tree first. I’ll also put their names and our phone number on their breakaway halters. And I’ll bring along the cellphone. All this because the thought of eating crow doesn’t appeal to me.

See this article in the February 2017 online edition: 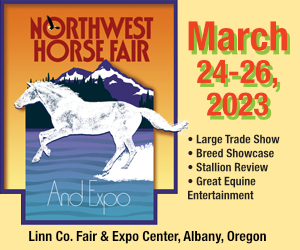 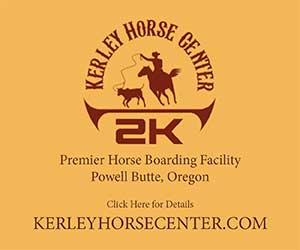 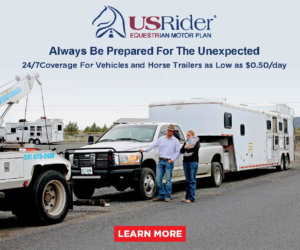