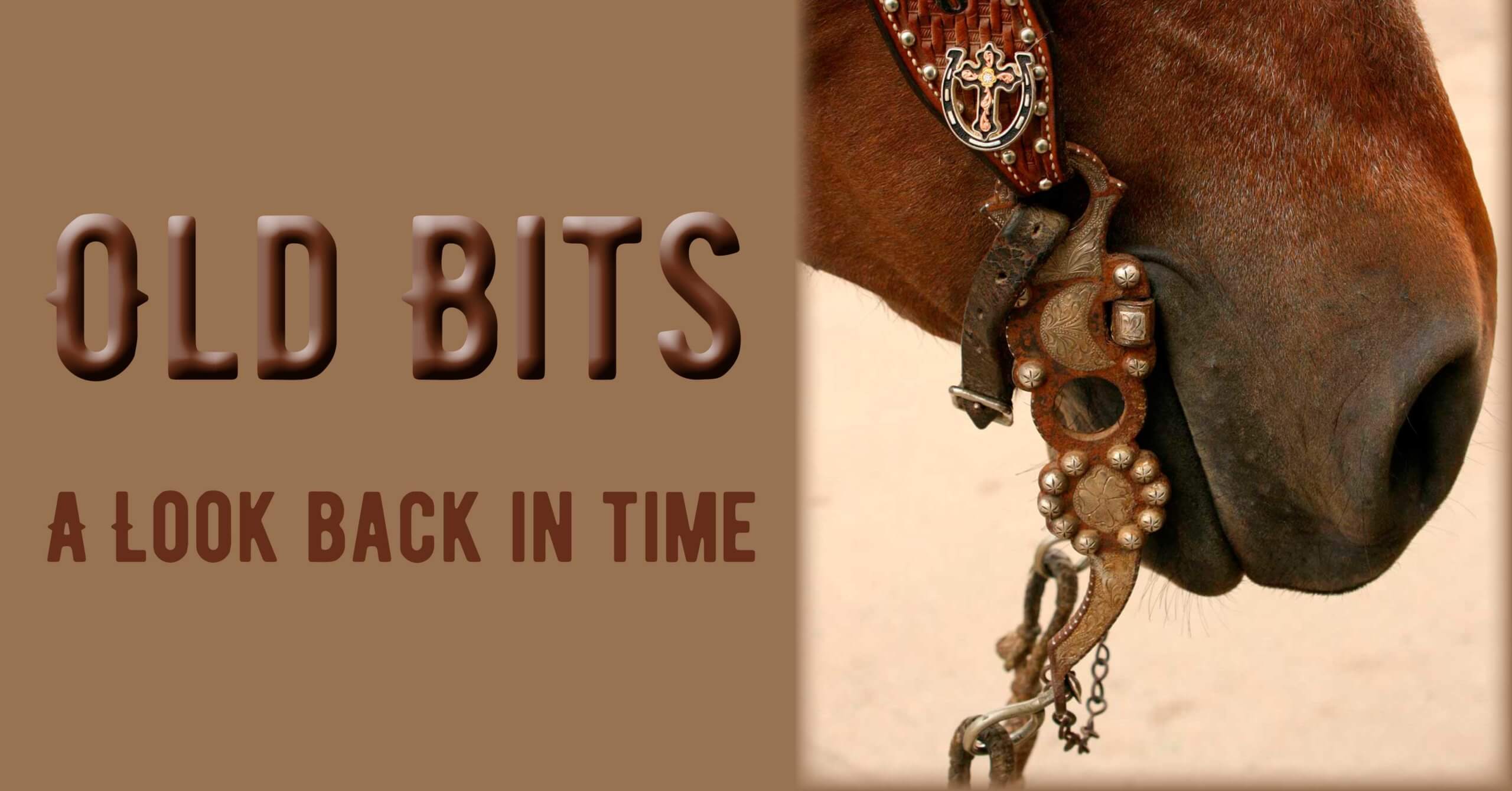 Providing optimal nutritional input will enhance reproductive performance. High quality protein intake concurrent with energy intake to maintain a body condition score (BCS) of 5.5- 7.5 is critical for reproductive success. Due to increased nutrient requirements for breeding stallions and mares in late gestation, a high quality (nutrient dense) feeding program must be utilized to maintain an appropriate BCS. Supplementation should not be used to try to make a poor ration excellent.

In addition to protein and energy needs, vitamin and mineral intake needs to be optimized. A loose trace mineral salt (not just brown salt) will provide adequate amounts of minerals which may be limiting in the diet. This trace mineral salt needs to be customized to the mineral status of the forages in the local geographic area. Mares in the last trimester of gestation need approx. 85% more calcium-and phosphorus than in the first two trimesters. Dicalcium phosphate may be added to the trace mineral salt to deliver and meet this extra need.

Vitamin status of pastures and forages are extremely variable. Preparation methods used to harvest and store hays will drastically affect the amount of available vitamins. Commercial concentrate feeds and trace mineral salts are fortified with many vitamins. These fortified products will help meet the needs of most reproductively active horses.

When a client wants to do everything possible nutritionally to ensure optimal reproductive performance in both mares and stallions, there are some nutrients that are more likely to be limiting in individuals. The following nutrients can be safely and effectively supplemented orally. Just providing more of everything is not optimizing a feeding program. Levels of supplementation need to be determined as they fit in the total balanced ration.

There are several basic molecules that are present in many different reproductive cells and tissues. Most of these are not available in a purified, supplemental form. Others that may be available are either not economical or are not absorbed efficiently.

Glucosamine is a very small “building block” type nutrient that is found ubiquitously in mammalian tissues. It is actively concentrated in some tissues such as connective tissues and all mucosal linings. Many important reproductive cells and structures contain large concentrations of glucosamine.

In the mare, the lining of the uterus and cervix are covered with glucosamine. The majority of the zona pellucida of the egg as well as the attachment site of egg to sperm are primarily made up of glucosamine. In addition, the structures that allow implantation of the embryo into the uterus are made of glucosamine. Hyaluronic acid (HA) appears to play a critical role in cell-to-cell adhesion in the early development of the cumulus mass (the primary constituent of HA is glucosamine).

While glucosamine is present in structures of the testes, sperm and seminal fluid, its major function in male reproduction seems to be on the acrosomal end of the sperm. Glucosamine is not only a structural component of the sperm and sperm-egg attachment site, it plays a major role in the Acrosomal Reaction.

Simply identifying a basic nutrient that is heavily involved with several stages of reproduction does not make it a good supplement. Most of the glucosamine containing structures mentioned contain the acetylated form of glucosamine linked together by sulphur bonds. However, this form has been shown to be highly utilized in the digestive tract, with little being absorbed. Any absorption of this form occurs via •passive diffusion. Glucosamine Sulphate is, however, absorbed actively from the digestive tract using a glucose transporter. This active absorption has been documented to be over 90% efficient within 30 minutes in at least 3 species. The acetylation of Glucosamine Sulphate as well as its conversion to galactosamine is readily performed in most tissues.

Supplying large amounts of a purified nutrient may not positively affect the desired systems and can have negative effects. There are several anecdotal accounts of both Chondroitin sulfate and injectable PSGAG’s causing decreased stallion reproductive performance. There is no verification of these theories in the literature but a reaction to these larger molecules by some individual stallions may explain these reports. However, the authors, along with faculty from 2 veterinary teaching hospitals, have experience with a Glucosamine Sulphate containing equine reproductive supplement (FoalMaker patent pending) that show it to have a positive influence on per cycle conception rates and total sperm per ejaculate while having no negative effects on stallion health (data submitted for publication). The authors also have experience with this supplement in problem mares. While several mares that had been bred but barren for several years became pregnant during supplementation, one or two cases did lose the foal when the owners discontinued the use of the product.

Biotin is a water-soluble vitamin that has been heavily researched in many species with respect to its effect on female reproductive performance parameters and gamete development. The most well documented effects are on sow conception rates and return to estrus post parturition. Many effects of biotin on prenatal development have also been established.

Boron is an ultra-trace mineral that is a good example of a nutrient that is beneficial to the spermatogenic cycle, embryonic, and fetal development when provided in an organic form. However, if the exposure is to an inorganic form, testicular damage and mutagenic effects arc common. Boron is involved in the production of many sex hormones.

Chromium is also an ultra-trace mineral whose deficiency can cause a decrease in sperm count, but exposure to inorganic forms can cause severe testicular damage, improper testicular development, or neoplasia. Many positive effects on female reproductive efficiencies and lactation improvements have been found.

Folic acid is a water-soluble vitamin that plays critical roles in the normal reproduction of cells. A deficiency of folate has been associated with defects in pre-implantation embryos and the neural, skeletal, digestive and urinary tracts of developing fetuses.

Manganese is the metal cofactor (preferred) for a number of glycosyltransferases. Research has shown that manganese plays a large part in attachment and conception. Exposure to inorganic Mn causes reduced male fertility.

Selenium levels arc important to reproductive parameters. If either too much or too little dietary selenium is present, conception is greatly reduced. The amount of selenium· in feedstuffs is dependent on the area they come from. Due to FDA limits on feed levels, injectable selenium may needed in severely deficient areas. .

Thiamine is a water-soluble vitamin that is crucial to the viability and motility of sperm. Normal development in the uterus depends on the presence of thiamine.

Zinc is a trace mineral whose deficiency has negative effects on testosterone levels and sperm development. Normal growth and lactation are both dependent on the presence of enough zinc. Exposure to inorganic zinc causes harm to male and female reproductive tissues.

Authors’ full contact Information: Please keep in mind this article was written nearly 20 years ago so the sources may not be available. We just wanted to show that this was a credible article in 2003 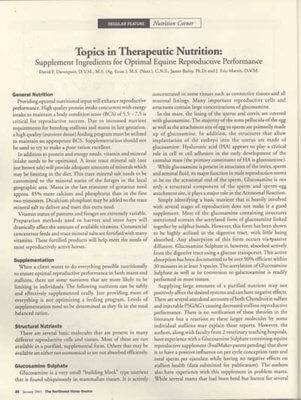 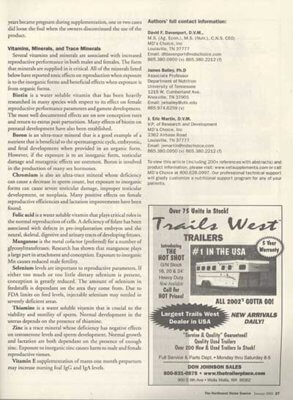 To view this article (including 200+ references with abstracts) and product information, please visit: www.vetsupplements.com or call M D’s Choice at 800.628.0997. Our professional technical support will gladly customize a nutritional support program for any of your patients.