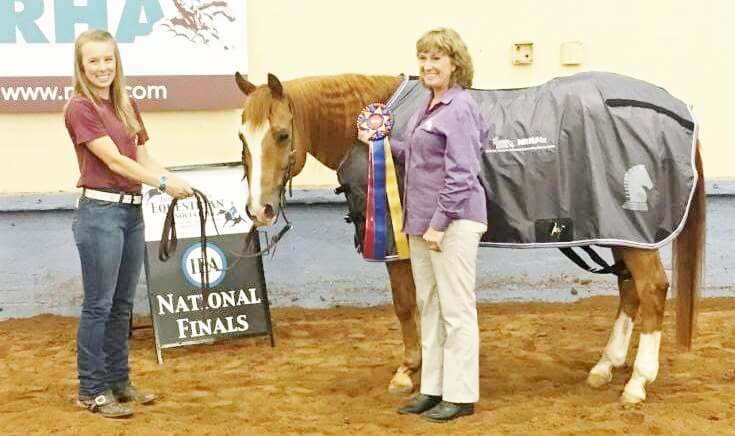 On the evening prior to the start of competition, it was standing-room only at the NRHA office where IEA riders, coaches and parents enjoyed an IEA Judging Fundamentals clinic given by NRHA Judge Jody Brainard. Following the clinic, NRHA hosted a welcome party for all IEA members, complete with a water slide, mechanical bull, games, food vendors, and more. Youth members of the National Reining Horse Youth Association (NRHyA) were on hand all weekend long to assist with IEA events and presentations, including the welcome party.
Judging this year’s Western National Finals were Lori Gordon (AQHA/NSBA) of Washington, Pennsylvania and Pete McAlister of Mitchell, Indiana (NRHA/AQHA/NSBA), Katie Finkes-Turner of Xenia, OH and Rebekah Irish of Galva, IL served as Show Stewards. Waltenberry provided professional photography and this year’s finals was live-streamed and archived courtesy of Equine Promotions and US Equestrian (USEF). Equine Promotions also provided ride-review screens in the paddock area for riders to review their rides with their coaches immediately following their classes.

Saturday morning kicked off the competition with individual Reining classes, followed by Horsemanship individual classes. The Intercollegiate Horse Show Association (IHSA) provided coffee and donuts in the morning as competitors vied for individual National Championship titles and in some cases, senior scholarship awards. Rising to the top of the competition for an unprecedented 3rd year was senior, Ellexxah Maxwell (Autumn Rose Equestrian – R5-2) who won both the Varsity Open Horsemanship and Varsity Open Reining classes to be named the 2019 IEA Leading Western Rider. Maxwell also won this title in 2016 as a Freshman, as well as 2018. She received a total of $2,250 in Senior scholarships money from IEA for her accomplishments this weekend. Maxwell is coached by Debbie and Ollie Griffith of Dublin, Ohio.

In addition to the Leading Western Rider award, IEA also presented the IEA Cross-Over Rider award on Saturday to Jordan Martin (Team Need A Hand – R4). Martin was the highest placing IEA rider to compete at both Hunt Seat and Western National Finals.

It was the first year for the Markel Insurance Ice Cream Meet & Greet at the NRHA Derby presented by Markel Insurance, and the event was a resounding success. Held in the Barn 6 Concourse, the Meet & Greet gave youth riders from both the NRHA and the IEA the opportunity to visit with Markel’s Director of Western Disciplines Frank Costantini as well as a few of the NRHA’s top riders. NRHA Professionals Mirjam Stillo, Casey Deary, Cade McCutcheon, and Fernando Salgado as well as National Reining Horse Youth Association Officers, took time to visit, sign autographs, and take photos with IEA members.

Sunday’s competition saw 24 qualifying teams competing in the team portion of IEA Western National Finals. The air was tense with excitement as riders and coaches kept tally of class points after each team class. Ultimately coming out on top of the team competition for both the Middle School and Upper School was Autumn Rose Equestrian. A highly successful team with multiple team wins the past three years, Autumn Rose Coach Debbie Griffith noted, “IEA makes them amazing riders. We’ve been really successful, and the kids work so hard. They put in a lot of time and a lot of hours in the barn.”

Also, on Sunday, Ollie Griffith, IEA Co-Founder and the person who was instrumental in adding the Western Discipline to the IEA, was recognized for his contribution upon his retirement from the IEA Board of Directors and the Western Committee. Roxane Durant, IEA Co-Founder and Executive Director, presented Ollie with a memento for his many contributions to the organization.

Winning the Reserve Champion Upper School Team top honors was Grier School out of Tyrone, Pennsylvania and coached by Chris McElyea. Grier School is consistently in the top rankings and is one of the teams that competes in all three IEA disciplines (Western, Hunt Seat, and Dressage). Taking home the Reserve Champion Middle School Team trophy was TMC Too from Cuba, New York coached by Michael and Tonya Cooper. The Coopers had two teams qualify for Western National Finals – TMC Equestrian and TMC Too. Together the teams won the Team Spirit Award.

The United States Pony Club, Inc (USPC) annually conducts the Horseman’s Knowledge written test at all National Finals which is open to any IEA rider member regardless of discipline or qualification at Finals. The written test was conducted on Saturday and the top four scores were invited to the practicum portion (hands-on testing). The top placing for the Horsemanship Knowledge test at Western Finals went to Alyx Swope-Bell, a Hunt Seat rider for Ozark Legends (Zone 7) who was volunteering during the show.

The IEA holds Sportsmanship in the highest regard and places importance on the conduct of both its riders and coaches throughout the regular season as well as post season competitions. Winning the NRHA Rider Sportsmanship Award was 14-year-old Jenna Woody, who rides with Flamekissed Equestrian. She has competed in IEA for three years. “There’s just a bunch of people you get to meet and make a bunch of new friends. I just enjoy being with people. I’m an extrovert, and I just love rooting on my friends,” she said. “IEA is awesome. It really has helped me.”

The NRHA Coach Sportsmanship Award was presented to Linda Dare (Dare Equestrian R5-2). Dare has been an IEA coach since the organization’s inaugural year in 2002. She is also the mother of NRHA Reining Professional, Trevor Dare, who was IEA’s first Leading Western Rider in 2006.

Sometimes the smallest packages pack the biggest punch and that was true for Volunteer of the show winner, Bryn Swope-Bell who will start her IEA career at Ozark Legends (Zone 7) next season. Swope-Bell worked tirelessly throughout the week at IEA Western Finals and was recognized for her tremendous efforts.

As previously noted, IEA could not conduct National Finals without the support of our Horse Providers and their fantastic horses. IEA recognized the following outstanding horses that competed at Western National Finals:

IEA is grateful for the support of all of our sponsors, including Bob’s Custom Saddles. Bob’s provided four custom saddles (valued at $4,200 each) to four class winners (Two on Saturday and two on Sunday) in a random drawing. Bob’s spokesperson and NRHA professional Gabe Hutchins proudly presented the following lucky class winners with custom saddle certificates:

A full listing of results can be found at www.rideiea.org.
About IEA:
Now approaching its 18th year, the IEA has nearly 14,000 members across the United States riding and coaching Hunt Seat, Western and Dressage disciplines. The non-profit (501(c)3) IEA was organized to promote and improve the quality of equestrian competition and instruction available to middle and secondary school students and is open to public and private schools and barn teams. There is no need for a rider to own a horse because the IEA supplies a mount and tack to each equestrian for competitions. Its purpose is to set minimum standards for competition, provide information concerning the creation and development of school associated equestrian sport programs, to generally promote the common interests of safe riding instruction and competition and education on matters related to equestrian competition at the middle and secondary school levels.