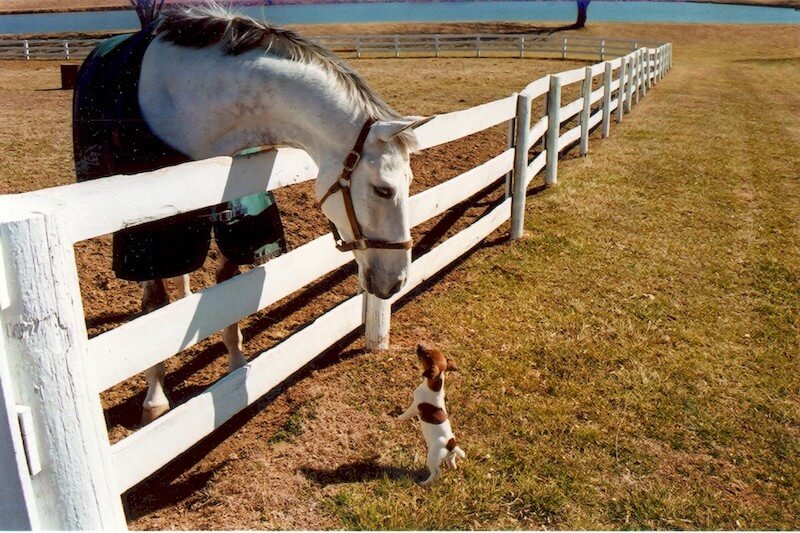 Those who live on farms will eventually be faced with the dilemma of vermin control.  When you have a never-ending food source, measures have to be taken to safeguard the health of your animals.  If you’re like me, I hate dealing with any poison, or traps, and would much rather have a “green” and humane way of dealing with it.  Might I suggest a four-legged employee that will be loyal, work as many hours as possible, and require only food for payment?  Let me introduce you to the Jack Russell Terrier.

Jack Russell’s are often kept around stables and barns to control rodent populations.  This small dog makes a big job of ferreting out unwanted invaders to grain bins and hay lofts.  A JRT will patrol to find and destroy the unwanted invaders and may spend hours focused on an area where the scent indicates the path of a rodent. These terriers have the ability to spring, like a fox or cat, to catch vermin.  Many a good terrier silently bursts into a barn before its slower human companion and zips to its favorite site to work on hunting a pesky rat or mouse.

Originally bred to hunt fox, this tenacious terrier will keep your barn clear of the vermin that comes with having horses. This is no ordinary dog: extreme intelligence, unwavering courage, bull-headed determination, never-ending humorous antics, amazing athletic ability and loyal devotion are all packed into a 10-15 pound body that rarely slows down.  Although not many Jack Russells in the United States do real earthwork, those who choose this terrier need to know that it is the very core of its existence.  Digging after quarry is the function it was born to do and the instinct to perform has been preserved in this unique working dog for centuries.

The history of the Jack Russell begins over 200 years ago.  It is not just the history of one man—The Parson John Russell (1795-1883), but many working terrier men of the British Isles, who had been working small, white-bodied working Fox Terriers for a century before.  It is important to note that JRTs were not originally bred to be pets, but to hunt vermin below ground.

Nowadays, those of us who work their terriers in natural earths (and I’m one of them), use modern-day technology.  A locator collar is put on the terrier and the locator box is used to track the terrier below ground. Once the JRT has found his quarry in its den and it does not appear to be bolting it, the owner will locate the position of the dog and start digging.  The Jack Russell is described as a “baying” terrier, which means that it is not bred to kill, but “bolt or hold at bay” until dug to.  This is a service provided across the United States to farmers and landowners, who have different kind of vermin destroying lands, crops, and livestock.  The vermin (quarry) that the Jack Russell hunts in the United States include, but is not limited to, fox (red & gray), raccoon, badger, groundhog, opossum, and nutria.

The Jack Russell Terrier Club of America ( www.therealjackrussell.com) is the largest breed club in the world for the Jack Russell Terrier. Every October, a national trial is held in Maryland making it the largest show in the world specifically for the Jack Russell.  In addition to this, the JRTCA offers certificates called Natural Hunting Certificates (NHC’s) for a terrier worked successfully to any of their recognized quarry.  The highest honor that is offered is that of the Bronze Medallion, where a terrier must work three or more different quarries.  Some of the requirements for an NHC are 1) The terrier must disappear from sight into a natural earth that it has located on its own, 2)  The quarry must be formidable, and 3)  The terrier must have worked in such a manner that if it were the only dog there that day the hunt would have been successful.

Next time you’re a visitor to a farm, barn, or stable, keep an eye out for the Jack Russell.  Most likely the only view you’ll see is its backside!

Sherri Rossmiller got her first Jack Russell in 1974 and has been showing, working, and breeding Jack Russell Terrier’s under her farm name of Sweetgrass since 1995.  She is a state representative for the JRTCA, as well as a Go-To-Ground judge and the trial chairman for the Rainier Hunt Classic.  Every July, a JRTCA sanctioned two-day trial is held on their farm located in Everson, Washington.  This year, the trial is July 26th& 27th.  Judges from England, Maryland, Texas, Oregon, and California will be coming for this premier event. The trial is open to the public and we invite you to check it out.  For more information email Sherri at sherri@sweetgrassterriers.com