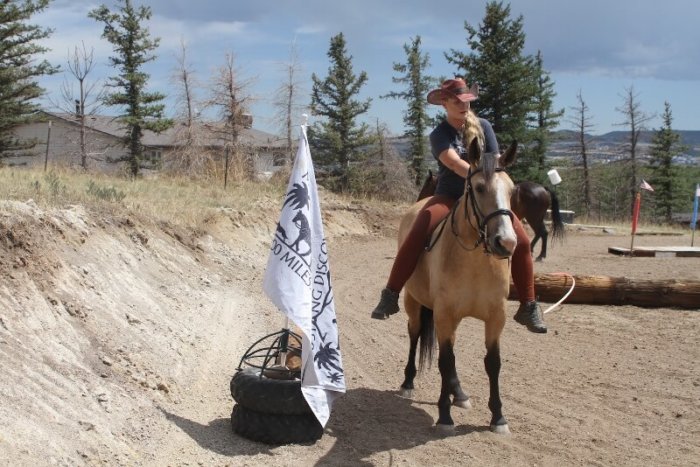 Lisanne Fear is a determined woman riding to create awareness of the Mustang. She is riding 5000 miles with the goal of helping to get 5000 Mustangs Adopted that are living in holding pens at various BLM facilities. There are currently about 53,000 Mustangs in holding. These once free wild Mustangs are living out their lives in confinement until homes are found. Lisanne, owns 12 horses, 10 of which are Mustangs. Her journey takes her on the southern route of the American Discovery Trail from Delaware to California.

Lisanne grew up on a cattle ranch in Wyoming where they worked the ranch using Quarter Horses. She loves working with horses and came upon an opportunity to train a Mustang. From there she fell in love with these national treasures and has committed a year of her life to ride for this cause.

Her challenges on the trip include her Mule getting loose, her dog being bit by a Copperhead snake, vehicle breakdowns and more. She even found a puppy on the trip which she lovingly added to her entourage. All the challenges have not deterred her from her mission. I found Lisanne to be a hardworking, passionate woman whose family values run deep. At just 28 years old she has taken a string of 4 Mustangs (1 mule) through cities, over bridges, through heavy traffic, highways, water and many other obstacles. She relies on the generosity of strangers to give her horses a resting place overnight and borrowed trucks and volunteer drivers to spot her on the trip.

While we couldn’t meet her Mustangs, she sat astride a beautiful Buckskin Mustang owned by the hosts, Jeff & Teri Hall. She gave a great talk while the Hall’s trainer rode their other Mustang through obstacles, riding bridleless, demonstrating the extreme intelligence and willingness of the breed. It was super-hot so we moved into the Hall’s home where we previewed the Robert Redford produced documentary, “The Mustangs: America’s Wild Horses”. Lisanne let a discussion afterward.

Lisanne brought up a very good point during the discussion. She said that we have provisions for managing other wildlife through hunting licenses, helping to control the animal populations. Mustangs are strictly rounded up and stay in holding pens until someone adopts them. Thankfully the Mustang Heritage Foundation’s TIP program is helping get trainers involved and giving them a chance to show their skills in training a mustang and then winning prize money from the competition and a percentage of the sale of the horse through the auctions at the end of the events. It was interesting to see how many of these trainers ended up bringing their Mustangs home!

Please consider helping out the Mustangs either through donations or adopting one of these beautiful horses. Always keep abreast of what’s happening with Lisanne and her Mustangs as she travels the final leg of her trip. See https://www.mustangdiscovery.com/ or visit her Facebook page: https://www.facebook.com/mustangdiscovery