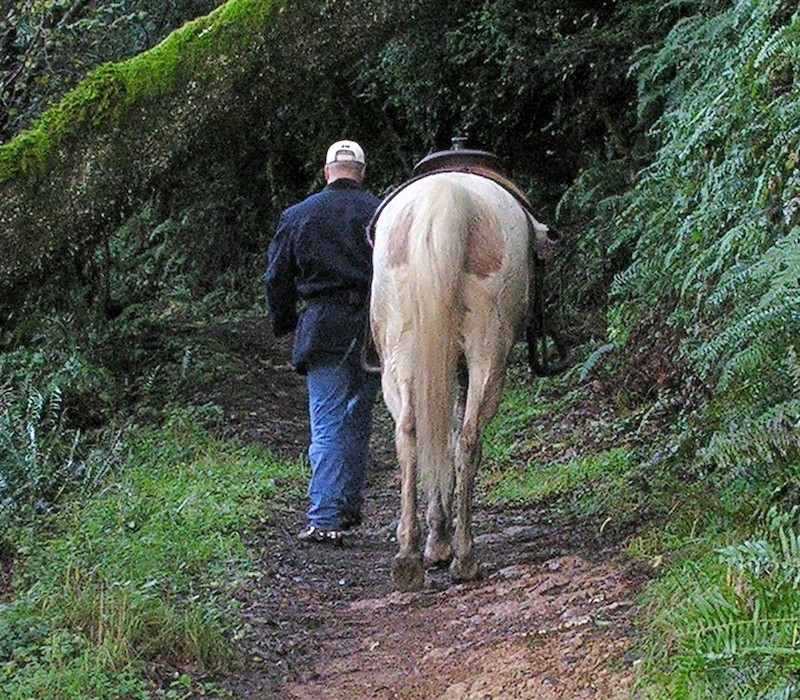 Four Logical, and Safe, Ways to Handle the Drama of a Wayward Horse

Recently I was on a training ride with a client’s horse in my favorite park. The horse was exceptional and I felt very secure on him. He just needed time and miles. While walking up a fire road he all of a sudden became very stiff. In a blink he was bouncing all over the place, trying to turn around and head back down the trail. Another blink and I heard a large-scale commotion headed my way. Immediately I thought it must be a group of mountain bikers. Instead, it turned out to be a loose horse being chased by a group of riders. While my horse and I worked our way through trees and brush, the frenzied group flew by. I saw only one rider who seemed to be in control of her horse, two others held on for dear life. After retrieving my lost hat and sunglasses, I noticed someone running down the trail, clearly on a mission—obviously the one who lost the horse to begin with.

What a scenario! The thing that worried me the most were all the “non-combatants” sharing that trail who were in for some unwanted excitement. I had passed hikers, dog walkers, and moms with strollers. They now had a herd of crazed horses and riders heading their way. All this mayhem could have been avoided if four common sense rules were followed:

Unexpected things can happen, but a loose horse is usually not nearly as bad as it may seem if these rules are followed. Minimize the risk of losing a horse by making sure you have good control to start with. Other precautions include making sure your tack is in good shape, avoiding places beyond the ability of you or your horse, and always wearing a helmet and carrying your cell phone on your person.

The loose horse I encountered eventually turned uphill and was munching on grass when I came upon it about 20 minutes later. He trotted right up as if to say, “Where have you been? I’ve been looking all over for you.” Unfortunately, the green horse I was on wasn’t at all happy about the enthusiastic stranger. After I got back out of the brush again I dismounted and led both horses to the parking lot where everybody had gathered. The owner was grateful to have her horse back and the lead rider was exclaiming what a good time she had had. The other two seemed thankful to be alive. No one was hurt that day, but there were definitely a few non-equine park attendees who were rattled by all the commotion. All in all, things could have been handled much smoother.

Practical Horsemanship – that’s Raye. In an industry that’s exploding with information and trainers, Raye takes the confusion out of horse training. By taking a problem and breaking it down into smaller, doable steps, his solutions create successes for all horse people. No matter the discipline, the age of the horse or the level of experience or expertise of the rider, success is the end result.

There are many fantastic trainers in this industry. Unfortunately, a lot of what is being taught can’t safely be used by the average horse person. Raye wants to relay information in a way that makes sense and feels safe to everyone. If the horse handler finds it confusing or complicated, the horse doesn’t stand a chance.

In the vast sea of horsemanship clinicians, Raye is considered one of the most accessible teachers with an approachable style that truly sets him apart. His intense desire to help people achieve clear and consistent communication with their horses creates a much higher level of learning with his clients. No problem is too small and no question is silly.

In addition to clinics and lessons at Critter Creek Ranch in Santa Rosa, California, Raye travels all over the Western United States (including Hawaii and Alaska) conducting clinics, private lessons and demonstrations. His teaching is also available on DVDs and in special television programming. For more information on Raye Lochert and his schedule, visit Raye Lochert Horsemanship on Facebook.