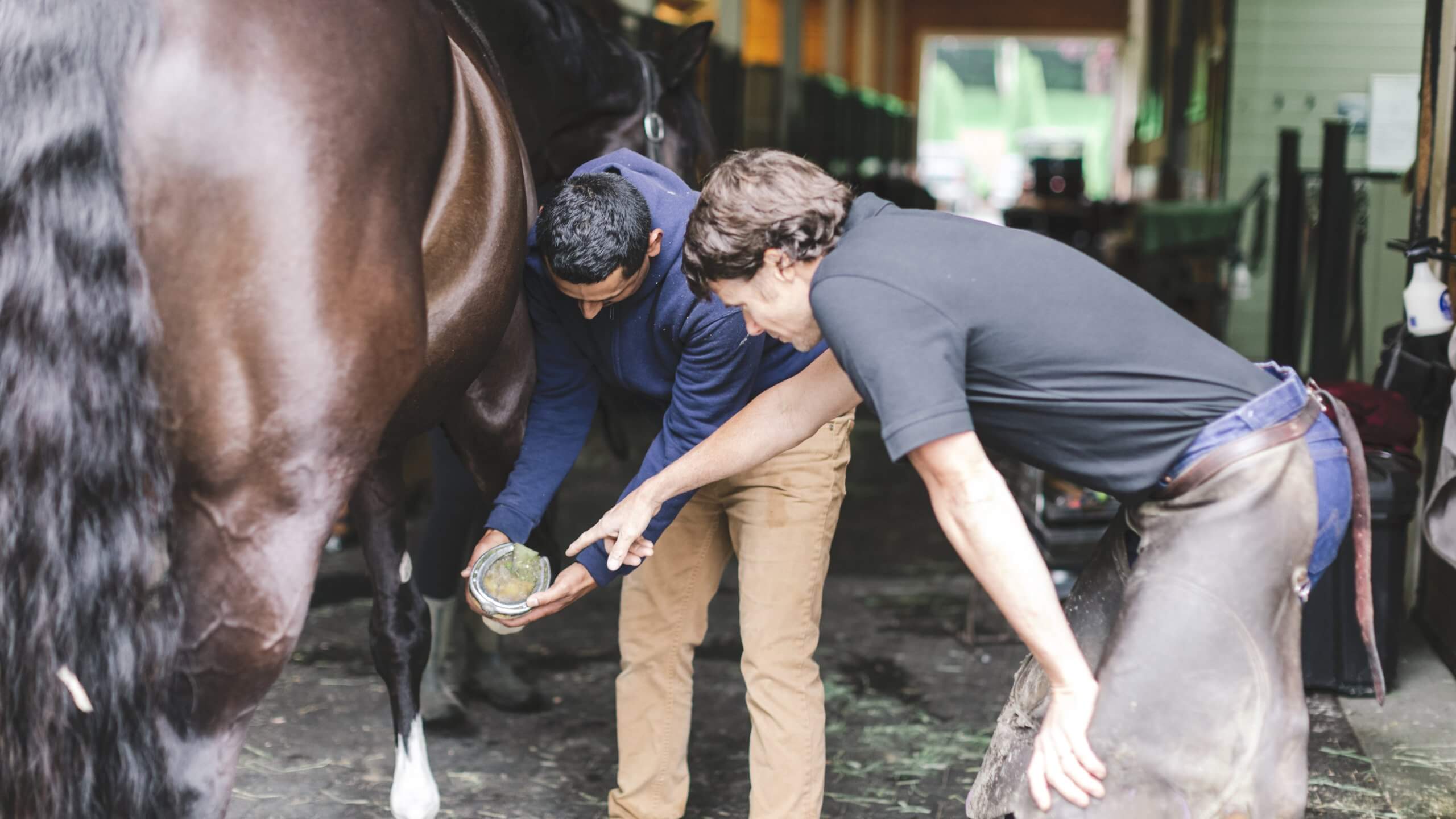 Most athletic horses are asked to put significant force on their hind end. Activities such as sliding stops, piaffe, and jumping require strength and stability of the hind quarters.

One big key to success in managing any athletic horse is understanding and maintaining proper hoof angles. This is just as important for the hind feet as it is for the front feet. When evaluating the feet, we look for proper alignment of the hoof to pastern axis which shows if the angle of the hoof suits the angle of the bones in the leg. We also look for correct breakover as this alleviates stress on joints and soft tissue structures.

It’s also important that the hoof has enough depth, that it’s stout, and has concavity to offer support. Studies show that horses with a negative (low) hind foot angle are 4 to 5 times more likely to suffer from hind end lameness, especially lameness caused by hock or suspensory ligament pain. We carefully evaluate the feet on any horse that suffers from hind limb lameness, especially if a suspensory ligament is involved. Radiographs are a great tool for looking at angles, depth, and breakover. We find that horses perform better overall when the hind feet are optimal. We have also had much greater success rehabilitating horses with injuries once the feet are correct.

One example of this is the horse with injury to the high suspensory (suspensory origin) of the hind leg. This particular injury is known for taking a long time to heal and greatly affecting the athletic future of the horse. There are many treatment modalities including surgery, stem cells, shockwave, etc. that have value, yet the rate of re-injury and lack of return to full performance remains a problem. We’ve found that attention to the hind feet can be very effective in these cases. Many horses with this injury have low heels and are at an incorrect (negative) angle which puts extra stress on the suspensory ligament. Correcting the feet will give the horse the greatest chance for long term soundness.

In the past we tried trailers, wedges, and various corrective shoes. Currently, we are having great success with farrier Seth Noble’s method of a regular shoe (set carefully to ensure proper breakover) along with a frog support pad and impression material. This adds depth and support, taking stress off the ligament. This modality along with proper rehabilitation has greatly improved the outcome for horses with suspensory injuries.

Success with a difficult injury such as this highlights the importance of proper shoeing and the influence it has on the horse. In any case of lameness, poor performance, or working to optimize performance, hoof care is one of the most important and powerful factors.

Seth Noble is a well-known farrier in the Pacific Northwest. His trimming technique is based on the goal of positioning the hoof capsule around the coffin bone in a specific way in order to maintain or increase the vertical depth and concavity of the hoof. This method cultivates growth, creates proper angles, and supports the internal structures of the hoof to aide in proper function.

Says Noble, “In my daily and therapeutic work, I have found that the lack of vertical depth combined with a long toe contributes to the breaking down of the internal structures of the capsule. The importance of the physics of the trimming technique is largely overlooked—even by farriers and veterinarians.”

Noble establishes a proper balance within the hoof through the trim. “This helps the most common problems such as cracks, white line disease, pedal osteitis, chronic abscessing, and tendon and ligament issues.”

To accomplish this, Noble starts every trim from the top first and brings the toe and flares back. He shapes the perimeter to follow the shape of the hairline. “Shortening the toe from the top first helps me not take too much from the bottom, because over-trimming the bottom of the foot is a huge problem,” emphasizes Noble. “The goal of the trim should be to maintain a sole thickness roughly equal to that of the dorsal hoof wall.”

In most cases, when viewed from the top, the toe length is roughly one third the length of the entire length of the pastern to the ground. From underneath, one third of the ground surface of the foot is ahead of the apex of the frog. Ideally, the concavity will slope upwards towards the toe when viewed from the bottom and will also be evenly deep mediolaterally indicating a slight positive coffin angle. “I emphasize not trimming too much of the hoof. If there’s nothing to take, don’t take anything. All four feet are trimmed before any shoes are put on so that proportions between pairs and between front and back can be checked and adjusted if possible.”

“The reason injury to a hind leg suspensory ligament is common among the English riding disciplines is due to the foot conformation at the time of injury. I have found that it’s consistently low in angle, and what farriers call ‘negative’ in angle. A negative angle can be thought of similar to walking around on your heels with your toes off the ground. The term refers to the angle of the coffin bone being tipped upward at the toe and down at the heels. Sole or vertical depth being too short from the widest point of the foot back to the end of the heels.”

This changes the stride of that leg in such a way that it lands with the toe first. As the horse’s weight moves to the rear of the foot, the pastern snaps upward into a high angle and stresses the suspensory ligament.

Treating suspensory injuries begins with proper trimming — shortening the toe to raise hoof angle, and not trimming anything in the heel region since it is already too low. Raising the hoof angle lowers the pastern angle and changes the landing pattern to be heel first. Almost always the rear of the foot is broken down from bearing proportionally too much weight. Noble addresses this with shoes and pads with silicone packing, which acts as an orthotic. The pad and packing add support to the overtaxed structure in the rear of the foot and begin to tip the weight-bearing forward.

As the ligament heals, the rest of the foot slowly grows to have a strong, thick sole, strong heels, and a higher angle. The end result is not only a healed ligament but a stronger foot overall. Utilizing this trimming technique as a matter of course at the time of each shoeing cycle will reposition the hoof capsule properly around the coffin bone.

Dr. Sara Perkins, DVM, graduated from the College of Veterinary Medicine at WSU in 2000. In 2001, Dr. Perkins became an intern at Rood and Riddle in Lexington, KY, gaining experience in equine surgery, medicine, anesthesia, lameness, and neonatal care. In 2002 she went to the University of California at Davis Veterinary Medical Teaching Hospital and worked with the equine internal medicine group as a resident. In 2005 she started Equine Medical Services, based out of Rainier, Washington. Her main focuses include sports medicine, reproduction, and nutrition. She owns a farm where she breeds Lusitanos. She rides dressage and cutting horses. She partnered with Equinavet in 2017. Learn more at www.equinemedservices.com

Seth Noble attended Oklahoma Horseshoeing School in 1995 after he fell in love with horses while working on ranches in Montana and Wyoming. He started his farrier business in Ellensburg Washington in 1996 and immediately became interested in collaborations with trainers and rehab specialists. 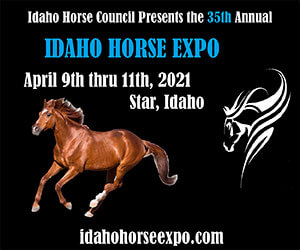