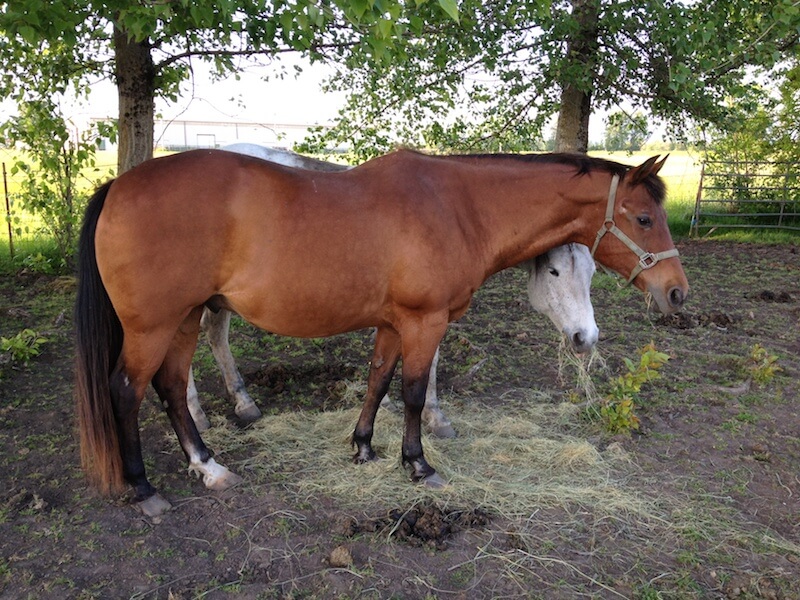 Two Ways to Help a Hard-Keeper

One of the most common questions I see on horse forums in winter is how best to feed an aging horse that’s losing condition. Senior horses can have complications that make it a challenge to keep weight on. Between teeth that may not be able to breakdown hay, decreased dietary efficiency and food pickiness, feeding a sassy senior equine can be harder than it looks.

Initially you should work with your vet to make sure there are no underlying health issues contributing to weight loss. Veterinarians can determine if a horse needs dental work, has an undiagnosed disease, or any other number of factors causing loss of condition.

Along with having a veterinarian in your corner to help keep an older horse healthy, there are things you can do to help your hard-keeper.

Get (or Keep) Them Moving

It may seem counterintuitive but keeping an older horse active offers multiple benefits. First, even though older horses may not run and buck like they did as yearlings, it’s important they still get out of their stalls for socialization and to work their muscles. Exercise helps maintain and build muscle mass. As both humans and horses age, we lose muscle mass and strength1. Therefore, if you have a horse that’s already in shape, it’s easier to keep him in condition. A horse that loses body fat and muscle mass is harder to get back to the condition they were prior to the loss.

Take for example the story of Jack. Jack is now 28 years old. The first picture you see of him is at age 25 when he looks robust and healthy. In the second photo, he had been turned out to pasture for a year without regular work, grazing on pasture grass and competing for thrown hay with a pasture mate. He lost a significant amount of weight and muscle tone.

The last photo is taken of him one year after he was pulled from the pasture, put on a balanced diet that appealed to his appetite and exercised regularly. Although he did not recover to the level of conditioning he had prior to his year spent in the pasture, he is much improved after a year of intentional feeding and workouts.

The importance of socialization also can’t be overstated. Another horse who was regularly stalled and worked infrequently due to chronic lameness started losing weight and simultaneously lost interest in eating. When it was determined that he had no underlying physical issue, his caretakers made sure he started getting regular turnout. Although his lameness limits his ability to move easily around the pasture and thus build a better body condition, the positive impact of socialization and new scenery were notable both in his attitude and in his interest in food. His appetite increased with regular turnout and he gained weight as well.

Jack, the 28-year-old gelding, is also a picky eater and his caretakers have had to experiment with what feed he will eat from time to time. They found that grass hay and alfalfa pellets were palatable and helped him put on weight. Recently he has started bypassing the alfalfa pellets and the search will continue for a feed that keeps his nutritional intake high enough to sustain his current body condition.

The dietary needs of an older horse can get complex. For example, the older horse can struggle to absorb important minerals such as phosphorus. Phosphorus needs to be feed in a 1:1 ratio with calcium, but a horse that has decreased kidney function should be on a low-calcium diet2. In addition to finding palatable feeds that sustain your older horse, your veterinarian can help you determine which dietary deficiencies should be aided with supplements.

Like anything with horses, keeping a senior horse in good condition is a labor of patience and love.