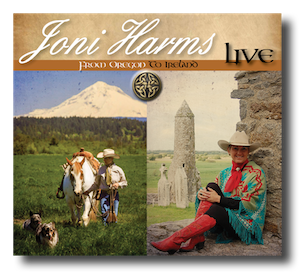 Joni Harms is no stranger to success. She has been a winner of multiple Academy of Western Artists Awards, including top honor for Entertainer of the Year in 2002. In 2003, Harms was named Female Vocalist of the Year and accepted the award for Song of the Year from the Western Music Association. Harms has been praised for her pure country voice since she signed her first record deal with the famed producer Jimmy Bowen of Capitol Records in the early 1990s. Since that time, Joni has released eight more outstanding albums. Her new CD was recorded live in Ireland with the wonderful Sheerin family band. It is a collection of her most requested songs.

“The majority of my songs include lyrics of the west because I love to write about things I’ve experienced,” says Harms. “Rodeo, cowboys and the ranch way of living shows through a lot in my music.”

Purchase the newest Joni Harms CD for $20.00 at joniharms.com.

Publisher’s Note: “You will immediately fall in love with Joni’s soft, gentle voice. I found her music refreshing and was soon tapping my feet and moving with the music. She really puts “western” back in country music. Each song tells a story; some are from her own experiences. I loved each story on this album. You’ll enjoy her sense of humor and appreciation for life. If you’re into a more traditional country music this is a CD you’ll want to add to your collection.”