“And the Champion, with a total score of 1123 points, is Joe Bell on his 11 year old Quarter Horse gelding, Chalo Gun Slinger!”

In the horse world where the typical scenario is one horse/one discipline, respected horseman Charles Wilhelm is taking another route. 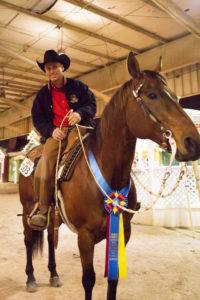 “I’ve always believed that it should be the goal of each and every horse to be able to quietly do a variety of tasks and exercises with confidence and success. Having a Super Horse is a great goal to shoot for, and even if you don’t accomplish that final ‘Super Horse’ level, the training process will help fill in any ‘holes’ in training the horse might have. For instance, I’ve seen top level dressage horses who shy at a cavaletti pole on the ground, and world class jumping horses who were out of control on an easy trail ride,” says the California trainer and clinician. “These may be great horses at the one thing they do, but in my book they aren’t Super Horses. A Super Horse can appear in a parade one day, work cows the next, compete in an equitation class the following day — and more. The Super Horse can do all that with lightness, cadence, balance, fluidity and responsiveness”.

“After a number of successful Super Horse Clinics at my ranch over the past several years, the popularity of these events inspired me to create a super horse competition. I wanted the challenge to be a platform for horses and people to achieve a higher level of diversified performance and a greater level of refinement in their training and riding skills. So I decided to give people an opportunity to develop their horses to participate in a wide range of events, and created the Ultimate Super Horse Challenge,” smiles Wilhelm.

The latest Super Horse Challenge was held at the Western States Horse Expo, Pomona on February 2-4, 2017. One of the great bonuses of having the Ultimate Super Horse Challenge at the Horse Expo was that these horses were exposed to huge crowds, golf carts, babies crying, horses all around them, bursts of applause, loud speakers — all kinds of environments, noises and situations that you can’t duplicate at home. It’s great exposure for the horse. You can’t buy that kind of training!

The four days of competition included the following:

· Performance Pattern: Including trot poles, jumping, sidepassing, up and down transitions

· Meet & Greet – at the entrance of the Horse Expo, to simulate a parade

Once again, the crowd was treated to top notch performances by the California Cowgirls, one of the best drill teams in the nation.

After the scores from all six events were tabulated, the overall Champion was Joe Bell on his horse Quarter Horse, Chalo Gun Slinger. As champion, Joe won $1000 cash, a beautiful Championship belt buckle provided by Horse Expo, Pomona, along with Clippers from Andis, Supplements from HorseTech and other great prizes from the Super Horse sponsors.

The Reserve Champion was Debbi Sullivan on Sundown Slim. Debbi was presented with a $500 cash prize, clippers from Andis, supplements from Horse Tech and other goodies.

The response from the audience, competitors and sponsors was overwhelmingly positive. “The support of our sponsors was one of the real keys to making this event such a success,” says Wilhelm. “I would like to thank our Super Horse Sponsors: Horse & Rider Magazine, Andis Clippers, HorseTech, Manely Long Hair, Equine HydroT and EquestriSafe, and a big thank you to Miki Nelson, and Western States Horse Expo, Pomona for the opportunity once again to showcase the Ultimate Super Horse Challenge.”