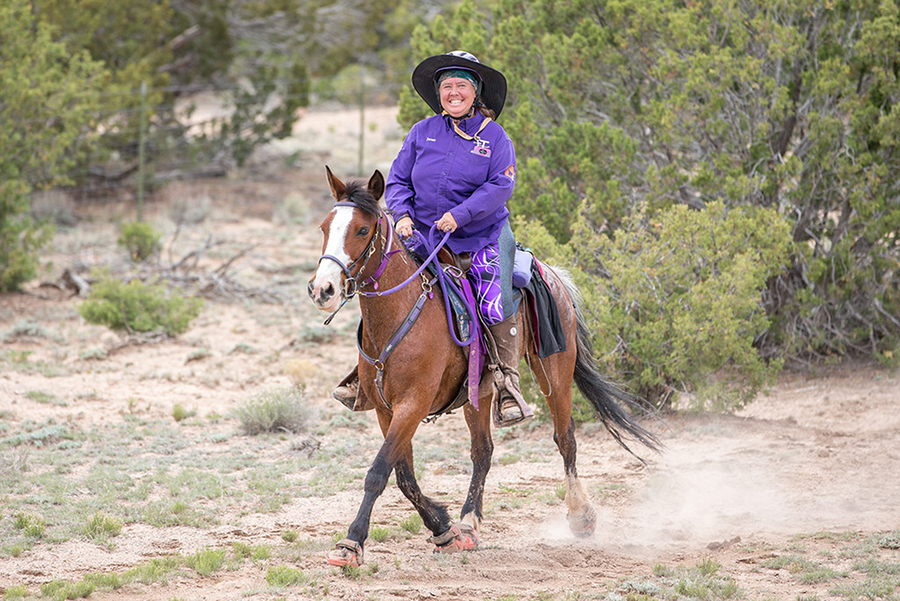 To earn the first-ever 5,000 mile LD award—an embroidered blanket—the pair competed in rides of 25-35 miles in one day. While most of AERC’s high mileage horses are those that compete in 50 mile competitions and up, Janet and Ladybug had to go to double the number of rides of most endurance riders to reach this milestone. In fact, the AERC has recognized 265 5,000-mile endurance horses and now, just one LD 5,000 mile horse, Lady Jasmine.

Theirs is an incredible accomplishment in distance riding and a testament to the hundreds of rides they have successfully completed together, particularly as the next highest LD horse mileage recorded by the AERC is 3,930. But perhaps equally as important as their mileage is the fact that Janet and Lady Jasmine have completed 209 out of 211 rides entered, and Lady Jasmine has never been pulled from a ride.

Don’t let her diminutive size (13.2 hands) and the delicate name, Lady Jasmine or “Ladybug” as she is fondly called, fool you—according to Janet this mare is tough, strong-willed and capable of digging deep. During their almost two decades together Janet and Ladybug have earned titles in many different competitions including winning the title of Open Champion in the Extreme Horseman’s Challenge (a series of six extreme cowboy races). Ladybug has also received the Spirit of the Mustang award once and the Super Horse award twice at the Utah Wild Horse & Burro Festival along with Reserve Grand Champion Overall Youth in the Tri-State Mustang Series.

About the AERC award, Janet says, “I am so thrilled to receive this award. It means so much to me. We have been a team through so many miles and trails. We have met some of the most wonderful people that we will never forget. We have seen some of the most breathtaking sights in our travels and we have done it all together.”

Ladybug was gathered from the Antelope Head Management Area near Ely, Nevada, on December 3, 1998. The following April, Janet and her husband ventured to Logan, Utah, with the goal of adopting a Mustang. Although Janet had her heart set on a Buckskin colt, there was something about the way that this small, very pregnant, 3-year-old roan mare looked at her that changed her mind. So Ladybug came home with Janet and two weeks later presented her with a charming stud colt. Just a few short weeks later, Ladybug was saddled and being ridden.

Janet and Ladybug did their first LD ride together in April of 2004 at Color Country. They went to this ride not knowing anyone, but came away after riding day 1 and day 3 with a whole new family and a love of the trail. They were both hooked on distance riding and they have never looked back.

After almost two decades together, Janet is still as enthusiastic about her mare as the day she brought her home. “Ladybug has continued to amaze and delight us and prove to us and the world that there isn’t anything this little horse can’t do,” says Janet. “Ladybug is a very versatile horse. She rides western and English, she drives, she does reining, mounted drill team, parades, pony rides at adoptions and BLM events, she excels at endurance and has even obtained her mounted Search and Rescue certification—all this from a little 13.2 hand mare!”

When asked what is next for she and Ladybug, Janet explains, “Our plan is to slow down, at least the number of miles we do for a year. Last year Ladybug did 965 miles of LD and a 50 totaling 1,015 miles, as a 19-year-old. We set out the year to get our 5,000 milestone and decided it would be fun to get the National LD Mileage Championship in the same year to really make it memorable. We completed rides in Nevada, Washington, New Mexico, Utah and Idaho.

“Our next goal is to make the AERC Decade Team, we have five more years to go, which will put Ladybug at age 25,” said Janet. The Decade Team award is for riders and horses who have done endurance distance rides (50 or more miles) for at least 10 years.

“I hope to keep her going down the trail so that she can help my granddaughter develop the love for the sport that I have with her,” said Janet.

Happy Trails to Janet and Ladybug as they continue their journey together!

In addition to promoting the sport of endurance riding, AERC encourages the use, protection, and development of equestrian trails, especially those with historic significance. Many events, particularly multi-day rides, take place on historic trails, and promote awareness of the importance of trail preservation for future generations as well as fostering an appreciation of our American heritage. AERC’s founding ride, the Western States Trail Ride, or Tevis Cup, covers 100 miles of the famous Western States and Emigrant trails over the Sierra Nevada.

Established in 1972, the American Endurance Ride Conference is headquartered in Auburn, California, “The Endurance Capital of the World.” For more information please visit us at www.aerc.org or call 866-271-AERC.