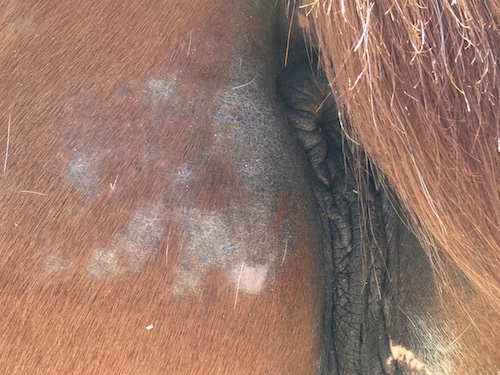 The life cycle of the pinworm is rather simple. Fourth stage larvae develop into adults in the large intestine of the horse. The adult female travels to the rectum and deposits eggs around the exterior rectal ring. The female pinworm normally lays 8,000-60,000 eggs at one time and then dies.

The substance that glues the eggs in place is about the consistency of egg white. As this substance dries it causes the horse to have an itchy sensation that causes it to rub its tail head. As the glue dries the eggs are dispersed throughout the horse’s environment. They attach to particles of dust and are blown by air movement into feeders and other areas where horses can readily eat them or they stick to objects the horse rubs on.

After being eaten, eggs hatch and the larvae develop into adults once again in the large intestine of a horse. This cycle was thought to take 4.5-5 months; however, Dr. Reinemeyer recently observed egg patches on foals as young as 3.5 months.

Trying to determine if a horse is infected with pinworms can be difficult. This also makes it difficult to determine the effectiveness of any control measures, such as deworming medication, pasture cleaning, pasture rotation, and stall cleaning. If we cannot evaluate these measures in some way, we really have a difficult time comparing different dewormers effect on pinworms. Ivermectin was initially thought to destroy adult pinworms; however, several years ago it appeared that it was not as effective as first thought. It is not completely clear whether the pinworms are developing resistance or possibly it never was as effective as originally thought.

Most often the first sign of pinworms is the horse rubbing its tail head and posterior aspect of its rear quarters. There are other reasons a horse may do this characteristic rubbing, such as certain fly allergies, dry skin or fungal infections. However, when we see a horse rubbing this area the first thought is the horse has worms.

Treatment for pinworms has become more complicated due to them appearing to be found more commonly in older horses and the fact that ivermectin seems less effective. When the itching continues after deworming with ivermectin you might try pyrantal pamoate or one of the benzimidazoles. It has also been recommended to use one of these medications in combination with ivermectin or moxidectin if the rubbing is severe and you do not want to wait to see if the ivermectin alone is successful. If your horse is rubbing its tail head check to see if you can see gross evidence of pinworms and consult with a veterinarian.

This is a summary of an article that was written by Dr. C. R. Reinemeyer and Dr. M. K. Nielsen and was published in Equine Veterinary Education. To view the full article, Google Review of the Biology and Control of Oxyuris equi.

Article and photos provided by horsemenslab.com