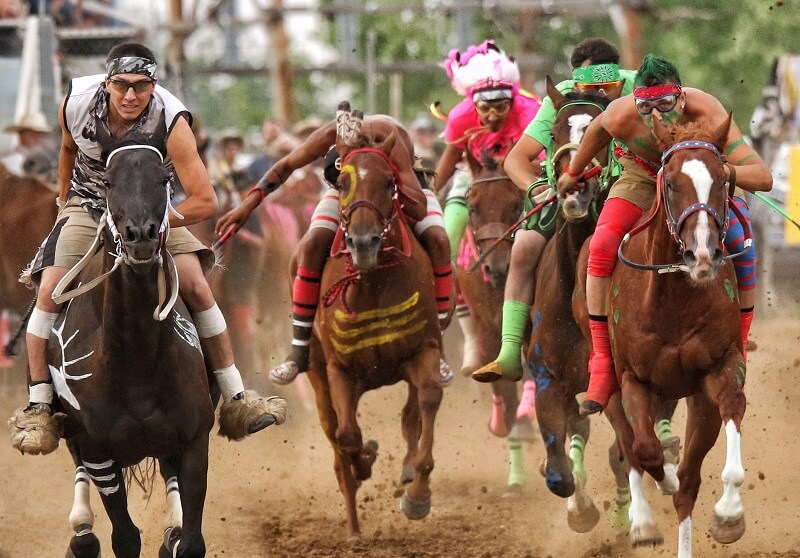 PINE RIDGE, South Dakota – Indian Relay Racing’s’ Championship of Champions will be held September 21, 22, 23rd at Walla Walla, Washington Fairgrounds. With the event moving from Billings, Montana it will be the first year Walla Walla will host the event.

Organized by Horse Nations Indian Relay Council, the Championship of Champions is the highest profile Indian Relay Race in North America. Riders from the United States and Canada compete all summer long in the Tour of Champions to earn entry into the lucrative and prestigious race meet. For three days, the top 40 teams in North America will be the stars of the “most extreme horse race on the track”.  Each day the riders will race 3 laps on 3 horses, striving to cross the finish line first. Friday and Saturday Indian Relay Racers will be vying for their positions on Championship Sunday, weeding teams down to a single Championship heat, determining the 2018 Champion of Champions.

Expect to experience the culture of the races with Native American drum groups and dancers entertaining between races. The races will be rounded out with Chiefs Races, Warrior Races, Maiden Races and the popular Kids Relay Races between Indian Relay race heats.

Opening Ceremony each day, starting Friday evening at 6:30pm, Saturday and Sunday events start at 2:00 pm. Vendors will be on site with Native American crafts and jewelry.

Tickets for Championship of Champions are on sale now. General Admission is $22 daily or take advantage of a three-day package special, limited Box seats will be available beginning August 16th. Tickets can be purchased at the Walla Walla Fairgrounds, and www.horsenationsrelay.com or by phone at (509) 527-3247.

Horse Nations Club passes, a VIP experience that began in 2017, are priced at $75 daily. They will give fans access to a private bar and hors d’oeuvres during the event, 2018 Championship of Champions program, meet-and-greets with several of Indian Relay’s stars and photo opportunity with 2018 Champion of Champions (Sunday passes only).