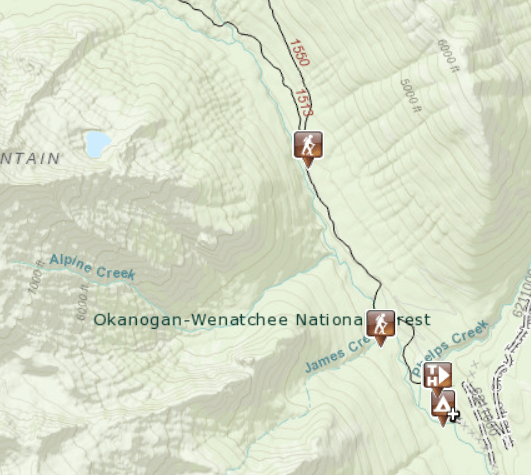 In mid-morning on September 14th, WASART received a call for assistance for a horse that was trapped in a ravine in the Okanogan-Wenatchee National Forest in Chelan County, a 3-5 hour drive from Seattle and Tacoma, from where most of our responders would be leaving. Once sufficient information was gathered, a team of 5 WASART responders was formed, with three other WASART responders on standby. They headed to the Trinity Trailhead where the response was being staged, about 140 miles from Seattle. Responders Bill V. and Kristi O. met at the staging site for the WASART rescue equipment van (located in Snohomish) and proceeded over Stevens Pass with the van, to the trailhead.

Already on site were the Chelan County Searc 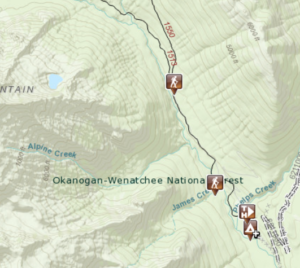 h and Rescue (SAR) Coordinator, several SAR volunteers, the horse owner and friends, as well as several people from Icicle Guides & Outfitters, a total of about 10-15 people.  A 4-person team from Tacoma Mountain Rescue deployed from the Tacoma area at approximately the same time as the WASART team.

A member of WASART’s Technical Rescue Team (TRT), Joe C., was the first WASART person to arrive, and had already hiked up the 1-2 miles from the trailhead to the horse when the rescue equipment van arrived. A radio relay had been established and he used it to request that two ropes and two rigging kits be brought up the trail to the site. Those supplies and responder’s personal packs were loaded onto waiting pack horses in order to expedite getting the needed equipment to the horse. WASART responder Valon M., also a TRT member, arrived on site as the team were departing the staging area for the trapped horse. After checking with the team waiting in the staging area, the SAR Coordinator cleared them to depart for the trapped horse.

Unfortunately, the horse passed away from his injuries before the remainder of the team and equipment arrived. The rigging kits and personal packs were removed from the pack horses and the WASART team carried them back down the trail to the staging area where they were stowed in WASART’s rescue equipment van. The pack horses continued up the trail to bring out the rest of the gear from the rescue site.

All responders returned to the staging area and debriefed, led by the Chelan County SAR Coordinator.

We are always saddened with a four-legged critter doesn’t make it. Our condolences go out to the owner and the family.

About WASART
The Washington State Animal Response Team (WASART) is a 501(c)(3) nonprofit all-volunteer organization that helps companion animals and livestock out of immediate crisis and dangerous situations. WASART is trained to help in situations such as if your horse is trapped in a well, your dog falls over a cliff, or your community needs help sheltering animals for short-term issues, like threat of fire. WASART does not self-deploy, and the team must be called out by an owner or an agency, such as the fire department, sheriff’s office, or emergency management.

We respond to disaster and emergency situations involving all domesticated livestock and companion animals. We are not trained to handle wildlife or exotic species. Learn more on our website: wasart.org.