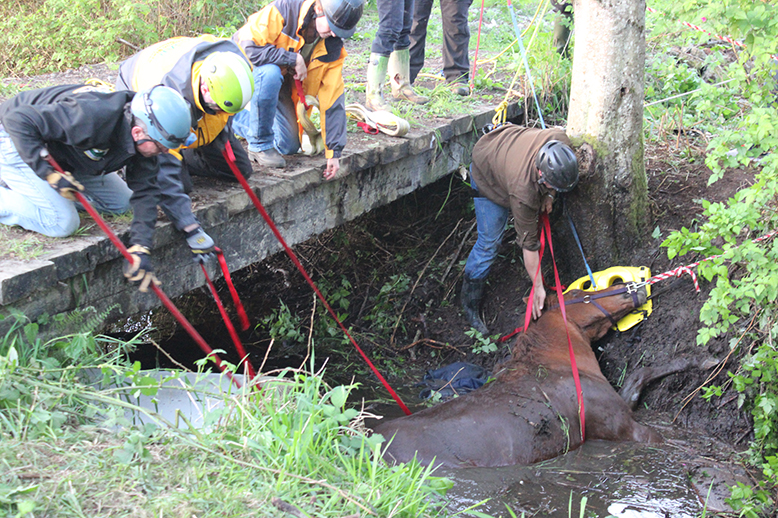 As we wrapped up our recent Fundamentals Training, we received a call about a horse in a creek in Everett. Many of the technical responders were on site at the training, ready to go. We arrived on scene with an hour of daylight to spare and were directed to the horse, a Thoroughbred named Honey, who lay in a Slackwater Creek just to the side of a bridge.

The location’s geography made this a difficult rescue. The creek cut deep, and the soft muck on the bottom made the situation dangerous. We had a quick discussion about the options and finally settled on placing one foot of the bipod on the bridge and one on the rescue side of the creek. We’d try to slip the supporting straps of the Becker sling under Honey and then lower the spreader bar to attach to the straps. After this we’d lift her vertically, pivot the bipod to solid ground and lower her.

One of the big dangers we needed to work around was the deep muck at the bottom of the creek and the muddy water. We couldn’t have a rescuer in the water with her. The water barely moved but unexpected flailing of the horse could suck a responder under the animal and into the mud. JC, one our best horse handlers, would be attendant to the horse, meaning he’d work closest to her and try to keep her as calm as possible. He stood on the steep bank, talking to Honey as we prepped. To keep JC safe, he put on a climbing harness and we attached a safety rope and had someone manage the rope so he wouldn’t fall in.

We also had the good fortune to have a vet, Dr. Penny Lloyd of Cedarbrook Veterinary Care, on site with a sedative in case Honey needed a bit of help to stay calm, and advice should we need it.

JC and a few others worked on getting the support straps under Honey with a strope guide, which is a long flat piece of metal with an opening at the end to slip straps through. The guide slides under the horse, the straps are threaded through the opening, and then the guide is pulled back through with the strap following like thread on a needle. Honey’s continued attempts to self-rescue made this difficult.

We were ready to go just as dark descended.

Honey cleared out of the water fairly easily, and seemed calm. However, once in the air, she thrashed and we were very glad of the careful rigging which kept her and everyone safe. We pivoted the bipod to swing Honey onto the rescue side of the creek. Just before she touched down, she panicked and thrashed some more. As soon as she calmed a bit, Dr. Penny slipped in and gave her a sedative, which helped nearly immediately. We continued to lower her. The sedative kept her from noticing the ground right away, but as soon as she did, she stood and was able to bear weight on all four legs.

We unhooked her from the sling and she was led away to be examined more thoroughly by Dr. Penny. We took a deep breath, gathered our stuff, and headed home. We’ve heard Honey has a few scrapes and scratches but is doing well.

A big thanks to Honey’s owner, the property owners, neighbors, Dr. Penny, everyone else who was on site to lend a hand, as well as the Snohomish County Sheriff’s Office for giving us the gift of their trust. We’re very appreciative of the support they gave us.

If you appreciate what we do, we can always use donations for gas money or to help replace our more specialized and expensive equipment as it gets stressed and taken out of service. We’re an all-volunteer 501(c)(3) nonprofit organization and all donations are tax deductible. http://washingtonsart.org/donate Thanks for your support!