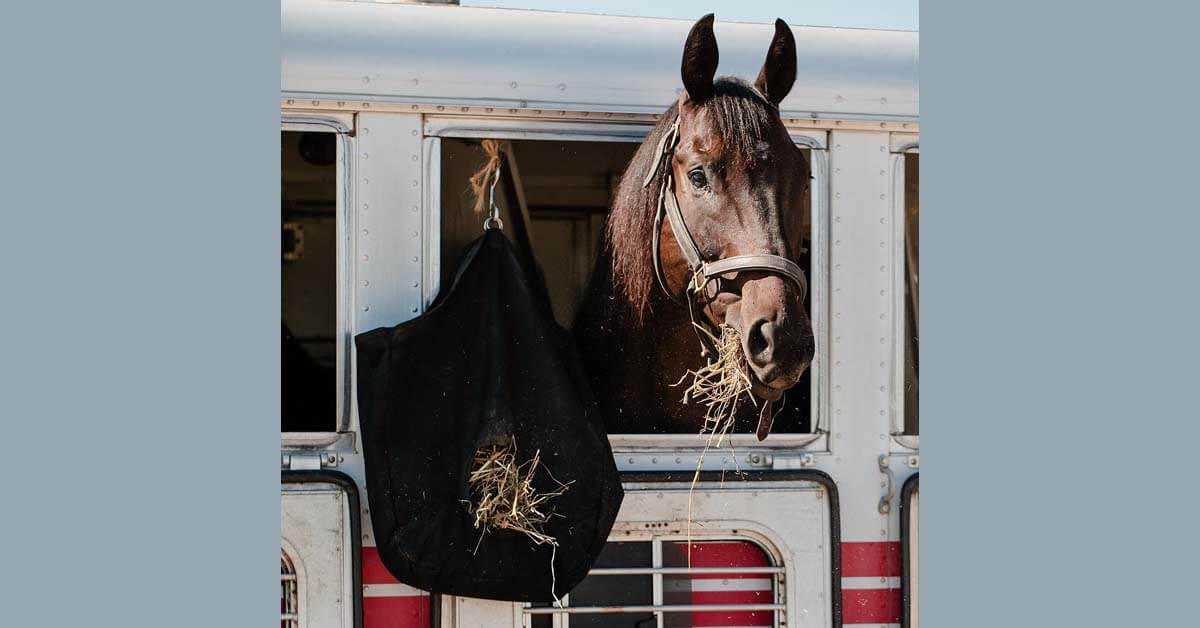 The horse world is cautiously getting back on the road as competitions re-emerge on June calendars. Productive horse people likely spent some of the pandemic doing horse trailer maintenance: checking breaks, tires, interiors, hitches and electrical connections.

Those critical aspects of safe equine transport tend to get a lot of attention. Horse’s respiratory health merits equal consideration because it can be badly compromised during trailering.

Competition itself has enough variables, notes Virginia-based two-time World Equestrian Games eventer Lynn Symansky. “They really increase when you combine those variables with respiratory issues horses can pick up while travelling. Especially when you are traveling with multiple horses in the trailer. You already have dust from shavings and bedding, plus whatever is coming in through the open windows. When each horse grabs and pulls hay from their hay net, it can be worse.”

Hay is mostly a good thing for traveling horses. Having something to munch on keeps them occupied, which helps reduce general travel stress. Chewing and digesting food keeps stomach acids at bay, lowering the risk of ulcers that often accompany that stress.

From a respiratory health standpoint, however, hay can be harmful in the trailer or van. That’s because even hay that has good nutrient quality and looks clean can be loaded with inhalable irritants. Dust, mold spores, bacteria and other allergens are not limited to hay that looks and smells bad. These are the main triggers of conditions on the Equine Asthma Spectrum that affect a surprisingly high percent of the equine population.

When these microscopic bits lodge in the airways, an inflammatory response to foreign objects kicks in. This can restrict the upper airway and impede the transfer of oxygen from the lungs into the bloodstream. That’s never good for the horse’s welfare or performance, and it’s especially bad when heading to a show.

Before hitting the road, Lynn’s crew steams their horses’ hay in a Haygain Hay Steamer. The high-temperature steaming process rids hay of up to 99% of the dust, mold, bacteria and allergens found in all hay. Putting clean hay in the trailer is especially important because the hay sits right in the horse’s breathing zone for the duration of the trip.

Heads Up: Not Healthy

Eating hay from an elevated position is already problematic, notes Kentucky-based veterinarian and dressage rider Dr. Wren Burnley, DVM. Eating from the ground is nature’s design for allowing the horse to clear inhaled material from its airways. They can’t do that in the trailer.

Opening vents and windows is important for ventilation during travel, although that can also disperse breathable bits further within the trailer. (Use a fly mask or other protective gear to guard the horse’s eye and face from anything that might fly in the window, Dr. Burnley notes.)  Stopping for rest breaks every four hours is the conventional wisdom for long trips. If a safe place can be found to unload the horses, letting them drink or graze with their heads lowered will help them clear their airways.

Before loading horses in Ocala, Florida, for the annual trek back to their Virginia base, the team at Will Coleman Equestrian loaded hay into their HG 2000 steamer to make sure all the horses had fresh, clean hay for the journey.

“We ship all the horses on steamed hay,” says the Olympic and WEG eventer’s head groom Olivia Quill. “Steamed hay is easier for them to digest and minimizes the dust while traveling.” A medium-size hay steamer, the HG 600 model, usually goes along with the WCE team. “They are easy to transport,” Olivia reports.