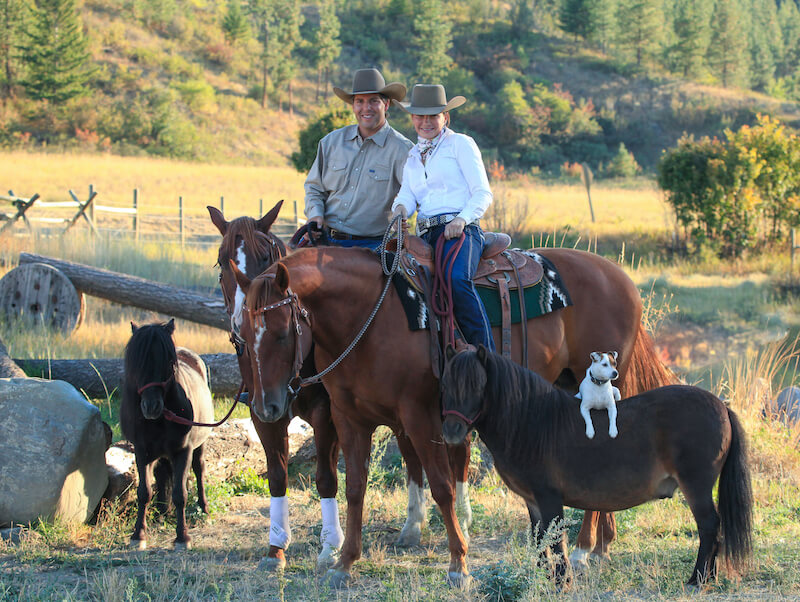 The Real-Life Adventures of Dally and Spanky

Like all good stories, this one starts at the beginning. As a young man, Steve had a passion for horses. He traveled the country to study under some of the greatest horsemen of the time. He eventually perfected his own method of training which he’s used for 20 years to help thousands of horses and riders.

Fan favorites at the Washington State Horse Expo, Steve and Francesca’s performances have become a “can’t miss” tradition. They’ll be back this year, March 1–3, at the Clark County Event Center in Ridgefield, WA.

Francesca and her trick-performing duo, Dally (a Jack Russell Terrier) and Spanky (a mini horse) are immensely popular. They’ve been featured on National Geographic Wild TV, appeared on the David Letterman show, and won at the World Dog Awards in Hollywood. Additionally, they’ve been featured on TV shows around the globe and graced the cover of National Geographic’s 2018 kids’ book, Amazing Animals. Breyer Model Horses released the “Dally and Spanky” model in 2017. And they have their own book, The Great Adventures of Dally and Spanky.

It’s no surprise that the Dally and Spanky story eventually reached a Hollywood movie producer (the movie will be released by Sony Pictures in 2019). “When I received an email from a Hollywood producer asking to do lunch, I really didn’t think that much about it,” says Francesca. “I didn’t think he was serious. However, we agreed to meet since we were in Del Mar anyway for the Night of the Horse Show.”

Meeting in a manicured park near LA with the producer, Dally and Spanky were out of their element. There were no fences, no arena, just lots of gorgeous green grass, a challenge for Spanky, who lives to eat. “They nailed it,” says Francesca. “The entire time the producer just kept saying, they’re so calm. I can’t believe it. They’re so calm.”

Not daring to get their hopes up, Steve and Francesca came home to Washington and it was back to business as usual training horses and helping people. When an actual script arrived in the mail Francesca was amazed. “This is really going to happen,” she said.

“Dally and Spanky: The Movie,” was a reality. They immediately got to work trying to anticipate as many things as possible before shooting started. “For example, knowing we weren’t going to be on arena footing, we worked on stall mats to get Spanky used to different footings. One of our other big concerns was teaching both Dally and Spanky to take their cues from a distance since we wouldn’t be seen in the shots,” says Francesca.

Early fall, Steve and Francesca trailered down to the shoot location near Thousand Oaks, CA and set up a temporary home for the horses at a nearby ranch.

“I don’t think they realize how amazing that little pony did,” says Francesca. “Each setup required 6 to 8 takes to get all the shot angles. He just did it.” Spanky did everything he was asked despite the totally new environment he was in. Nothing seemed to faze him, “not cameras, lights, 50 or more crew around him,” not even the fact he was turned loose with no barriers and asked to perform.

Both Steve and Francesca attribute a lot of Spanky’s success to the Rother Horsemanship training method — a method that includes teaching horses how to understand and react to pressure, so training holds in potentially dangerous situations… like a fire.

“We were told over and over again by the crew that Dally and Spanky were the best animals they had ever worked with on set,” says Francesca. They started calling them the “one-take wonders.”

With a little more than a week of shooting left, fires started raging all over California, including in the small horse community in Agoura Hills where Steve and Francesca were boarding their horses. Seeing the smoke and hearing the news Steve asked the ranch foreman if the ranch was in the path of the Woolsey Fire. The answer was no, the experts were predicting a zero percent chance of the fire heading their way. But the fire turned, and the ranch owner decided to make the call to evacuate ahead of the official evacuation order.

Soon volunteers were pouring in with trailers to help move the 50 or so horses who lived at the ranch. “It was night, super dark except for the red glow in the sky and the lights of the emergency vehicles,” said Steve. “We quickly rounded up our horses and tied them to the outside of the trailer for a quick load and get away, then started helping load horses who were too panicked to get in their trailers.”

Working together, Steve and Francesca quickly loaded up all the horses—they even took a few minutes to toss in a little trailer training while they were at it. “It really just added a couple of minutes to each horse and I wanted to give them the best shot possible of getting the horse back in the trailer if the winds turned and they had to do another emergency load,” says Steve.

According to Steve, one of the reasons he teaches his horses to understand pressure is for situations like this one. While they were helping other people with their panic-stricken horses, Spanky fell asleep where he was tied to the trailer while awaiting his turn to load.

Horses all in and on their way to safety, our heroes took a few minutes to help load the donkeys, goats and chickens that also made the ranch their home. Then they loaded their patiently waiting crew and made their own way to safety. They learned the next day that more than half of the ranch facilities had burned to the ground. In barns that hadn’t burned, the stall mats had melted.

In retrospect, Steve said he has two takeaways from the trip. The first takeaway was proof his method works as demonstrated both by a superstar performance from Spanky on the movie set under very difficult conditions and how well their practiced emergency two-person loading method worked to save horses lives. His second takeaway was how impressed he was with the horse community and how quickly they came together and helped each other. “The horse community is comprised of some of the best people I know. It was humbling to see how quickly strangers answered the call to help and to see them work as one.”

Bio: Lynn Jenkins is a freelance graphic designer with a life-long passion for horses. Lynn worked at her first newspaper while in high school, then joined the Navy where she became a Navy journalist. During her ten-year enlistment, she specialized in broadcast journalism. She attended Syracuse University as part of a special military graduate photojournalism program where she focused on both news photography and writing; this led her to the staff of the Navy’s flagship magazine and assignments around the world. Following the Navy, Lynn joined the marketing staff of the Disabled American Vets in Washington, DC. After returning to the Northwest, Lynn worked at printing companies, color houses, and an ad agency honing her technical production skills. In 2011, she decided to live her dream of being a graphic designer and LynnJ Graphics was born. lynnjgraphics.com