Ridding hay of respiratory irritants is easier than many think.

December 18, 2018: The benefits of hay steaming are indisputable. It rids forage of nearly 100 percent of breathable airway irritants, adds water to the horse’s diet, increases palatability and smells divine. Everyone wants it for their horse but some “regular” horse owners assume that steaming is only feasible for those with professional barn help.

Amateur rider Carol Mervis works full-time at the Harvard Business School in Boston. She has an almost hour-long drive to her mare, Emmy, in Sudbury, MA, where she rides nearly every night after work. On the recommendation of one of Emmy’s vets, Suzanne Loheac, DVM, Carol bought a half-bale HG 600 steamer 18 months ago. 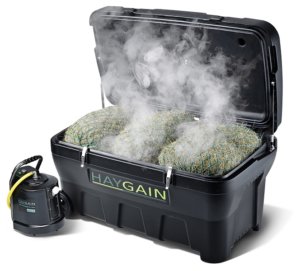 Competing at a show that summer, the now-13 year old Thoroughbred/Warmblood cross developed a fever, then a cough. Although a cause was not determined, Dr. Loheac treated the mare’s fever quickly, but the cough lingered. The veterinarian suggested steaming and Carol began researching Haygain USA’s science and equipment. In the interim, she soaked Emmy’s hay to reduce dust, a major culprit in respiratory disease. “That was really a pain,” she recalls. “As I researched Haygain, I realized how much better it was to steam versus soaking.”

Emmy has been on Haygain Steamed Hay ever since that epiphany and has been “really healthy and, knockwood, in overall better health.”

Emmy lives at Blue Meadow Farm, a public boarding stable that’s home to between 22-24 horses. The stable’s owner was concerned about the Haygain unit at first, Carol relays. Worries about where the chest would go, safety and containment of the effluent produced during the one-hour steaming cycle were addressed.

The rugged, thermally-sealed 28” by 27” by 27” chest lives without incident in the barn aisle. It sits on a rubber mat with edges to prevent possible overflow of the effluent tray from damaging nearby wood. And Carol assured the stable owner that only she would operate the equipment, which has built-in safety features that include a run-dry alarm and warning light. The dressage rider is meticulous about every aspect of her horse’s care, so it was natural to insist on doing the steaming herself.

An admitted Emmy-spoiler, Carol makes fresh hay every night, enough for the following day and then some. Steamer prep is part of her pre-ride routine: wheeling over the hay flakes and filling the boiler with water. The hay steams during her post-ride routine.  “I put a half a bale in there, then usually try to stuff a little more in.”

Feeding the hay within 12 hours of steaming is ideal and it can safely be fed up to 24 hours afterward. Carol’s process produces enough hay to feed Emmy a little as they are preparing to ride each evening and a full meal afterward, to leave some in a duffle bag for the stable hands to feed when the mare is outside during the day and to share a little with Emmy’s envious neighbors.

Emmy has become quite the connoisseur. She lives several stalls away from the steamer, but never fails to nicker when the Haygain scent drifts down the barn aisle. “She still has the night before’s hay in her stall, but she’ll stop eating that and nicker while the new batch is cooking.”

“Yes, it takes some extra time,” acknowledges Carol. Along with the pre-steam prep, she empties the boiler every night, hoses down the chest weekly and occasionally descales the boiler unit.

“Once you get your routine down, it’s not that big of a deal,” she concludes. Most importantly, Emmy’s easy breathing and overall good health make it well worthwhile.