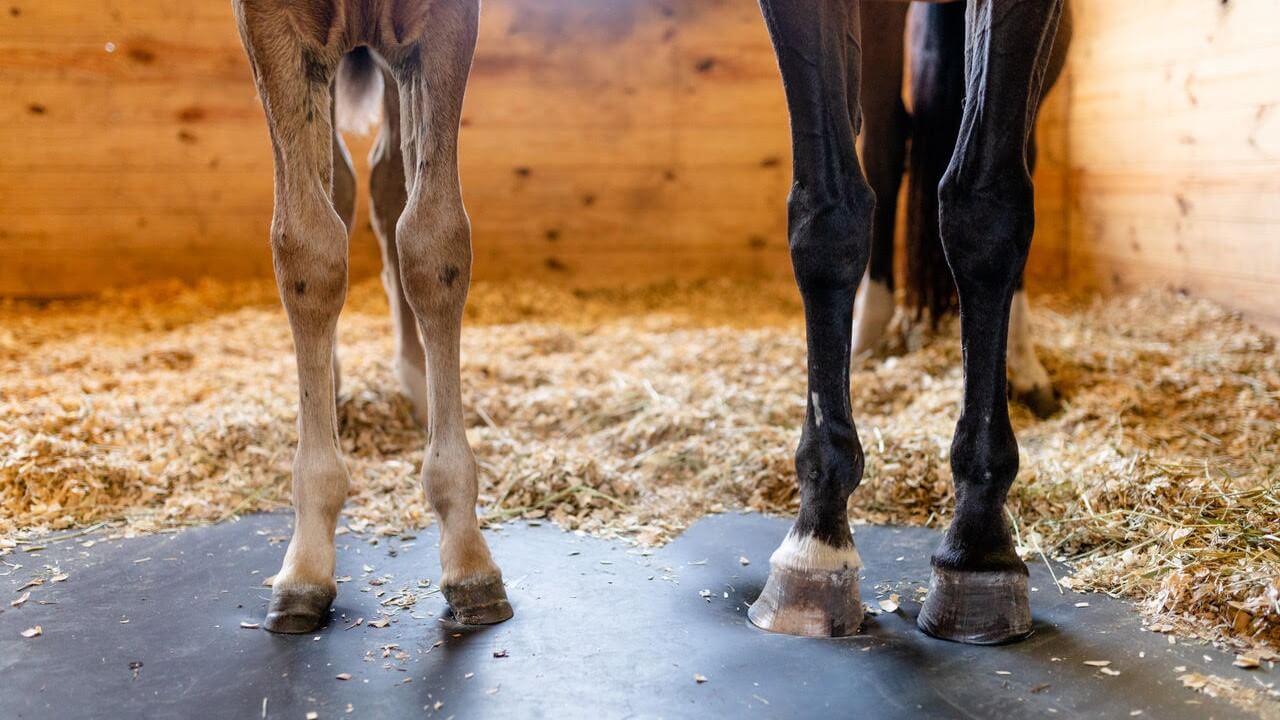 Stall flooring isn’t the sexiest subject among the many considerations in building or updating a barn. But leave it to the last at your peril, counsels renowned barn architect John Blackburn. As the title of one of his most popular books, Healthy Stables by Design, suggests, Blackburn and his team at Blackburn Architects PC prioritize horse health every step of the way. The owners’ goals for their stable and the demands of their site are equally important.

Because stall flooring impacts horse health and owner’s goals, it should be determined at the outset. Over 30 years, Blackburn has constantly refined what is now a proprietary questionnaire for owners to complete as step-one in the process. The answers are critical to the firm’s work and in helping owners identify priorities and allot budget accordingly.

Leaving flooring decisions to the last can be a costly mistake. Most options require leveling the base, pouring concrete, compacting the base material and/or laying a grid or creating another means of drainage. Re-doing that after the walls and the rest of the structure are up is an expensive, laborious inconvenience. It’s easily avoidable by planning for how the stall will be used, by what kind of horses and for how much of the day.

How the stalls will be maintained and by whom is another important factor. At-home horse keeping is many a boarder’s dream, but underestimating the time it takes to maintain the stable is a top tarnisher of that dream’s manifestation. Stall flooring choice plays a part in that.

Stall-related decisions include size, stall fronts, doors, walls, lighting, feed and water fixtures and flooring. Flooring ranges from the most basic: clay or stone dust to the most expensive options that include cushioned flooring that is sealed to the stall walls and custom-made interlocking rubber bricks.

Horse health-driven flooring priorities are safety, comfort and how it impacts stable air quality. Safe flooring is a stable surface with traction to prevent slipping when horses walk, lie down or stand up. It should be level at installation and constructed to stay that way even with hard keepers that may paw or pace the floor. Bases made of compacted dirt or stone dust will eventually form depressions, even when installed with plastic grid systems to aid drainage and ease cleaning. Proper maintenance is critical.

Comfort and joint health are attained by cushioned flooring or the use of enough bedding to create cushion. This is important for rest and sleep and to reduce wear and tear on joints. A level floor also encourages horses to distribute their weight evenly.

Surfaces that emulate a gymnasium mat in their degree of give require horses to make tiny muscle movements to maintain their balance. The resulting proprioception has the therapeutic effect of prompting blood flow and minimizing inflammation. Equine physical therapists recommend this flooring characteristic to accelerate healing, whether from everyday work or injury or surgery rehab.

Flooring’s impact on barn air quality is often overlooked. “Odors and bacteria accumulate in the barn,” Blackburn explains. “The horse’s respiratory system is so sensitive; we do everything we can to protect it.” Situating and designing the whole barn for ventilation and air circulation are crucial for all of Blackburn’s designs.

Cushing and clean air are points in favor of flooring with a one-piece sealed top cover, such as ComfortStall. This system prevents urine and other fluids from seeping through and becoming a bacterial bouillabaisse at the stall base.  Even well-snugged stall mats, a less expensive option, allow some fluid to seep through to the base.

Durable, sealed, one-piece top covers also enable sanitization. The Cornell University Veterinary Hospital has had ComfortStall in its post-surgery stalls for 10 years, partly because they are easily sanitized between patients.

Bedding is major contributor to bad barn air. Wood shavings are full of respirable dust and straw was found to promote fungal growth in a recent study of Inflammatory Airway Disease in active sport horses. The need for only minimal bedding is another attribute of flooring with built-in cushion. These systems only require enough bedding to absorb urine, which is then easily removed when soiled. Less bedding equals less dust and less time, labor and costs of buying and removing bedding. It’s easier on the environment, too.

No flooring lasts forever, but investments up front usually correlate to longer life.

As an independent contractor, Graham Russ sees stall flooring from a different perspective. Over several years of installations in new stables and replacing it in existing barns, he sees more owners making a substantial upfront investment with the realistic expectation of a return in the form of horse health and maintenance savings.

“A lot of my installs are replacing the 4′ by 6′ rubber mat puzzle pieces,” says Russ, who is based in Ft. Worth, Texas. “They usually have cracks between each mat. They provide little cushion themselves and they are usually put down over concrete or gravel. That lack of cushion really causes problems for horses.” But it’s pocketbook pressure that initially turns many to the ComfortStall installations that he’s doing more of the last few years.

“People go from seven bags of shavings per stall to one bag,” Russ explains. “This product pays for itself in nine or 10 months. It sells itself.” And that’s the case even though its upfront cost is considerably more than seemingly similar brands.

ComfortStall’s cushion comes mainly from a layer of proprietary orthopedic foam while other types use geo-textiles and a crumb rubber-filled, channeled mattress for cushion. The flooring systems can look the same to the casual observer but not to Russ, who has installed and observed the performance of various methods and materials. “When you are going to spend the money, you might as well do it right the first time and not worry about it again,” Russ states. “If you don’t want to spend the money, go with the 3/4″ stall mats and a lot of shavings.”

Even without the shavings and labor savings, flooring costs should be considered as amortized over time. ComfortStall, for example, has a six-year warranty and an average life span of 15-20 years. “I work at barns where horses have pawed through the mats all the time,” he says. “I’ve never seen a horse paw through ComfortStall.”

Florida hunter/jumper trainer Emma Whillans is an unusual barn owner. First, she was only 23 when she broke ground on her dream barn and 25 when it was finished and full of happy clients.

Second, she didn’t get too excited about eye candy options like rooftop finials or fancy paint schemes. Instead, she fixated on stall flooring. It came first in her budget largely because she knew what she didn’t want: heavy, unwieldy stall mats that have to be hauled out regularly and hosed down, while the stall base was dredged and re-leveled. She’d done her share of that as a working student for other trainers and knew there had to be a better way.

Affordable board rates were a priority, too. Whillans knew that less bedding would help with that, but she didn’t want to sacrifice cushion and comfort for the horses. “When I saw ComfortStall’s flat surface of rubber, I knew that’s what I needed. No matter what happened, I knew I had to have that in our budget.”

She started with ComfortStall in 16 stalls and has already added another eight, including a foaling stall where her former jumper Della gave birth to Uno earlier this year. It was Della and Emma’s first delivery and having a comfortable, safe surface throughout the delivery and first hours of Uno’s life gave Emma further reason to love the flooring investment she made when Whillans Equine was only an idea.

Whillans’ horse-first forethought is the ideal starting point and she was wise beyond her years to give flooring the top priority it warrants in any barn planning and budgeting process.