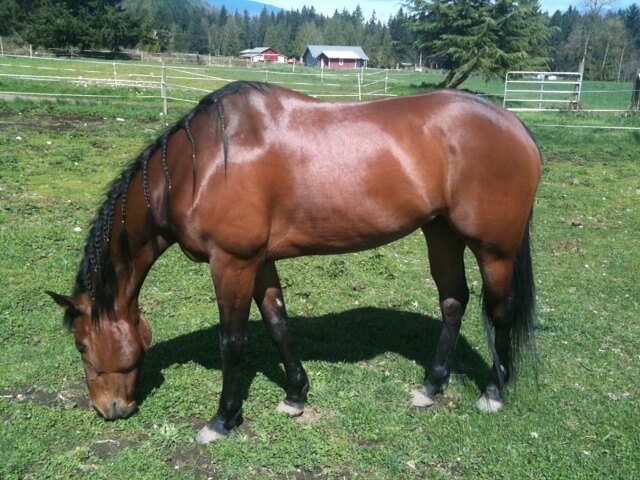 An Unusual Colic in a Performance Horse: Part 2

When we left off last month, Hemi had been diagnosed with inflammatory bowel disease and was started on corticosteroids and put on a low bulk diet (no hay, only complete feed/pellets). His serum protein was dangerously low and he still had occasional low grade bouts of colic.

The causes of these intestinal reactions are just as difficult to diagnose. They can be the result of an allergen in the feed, toxins, reaction to parasites, or infection. There are also some types of cancers that will infiltrate the intestinal wall. Inflammatory bowel disease is typically diagnosed based on clinical signs and ruling out other potential diseases. Blood work is extremely important, especially to monitor white blood cells and protein. In Hemi’s case, his protein had to be monitored every day, if not twice a day, because it was so low. An abdominal ultrasound is also crucial because we can obtain an actual measurement of the thickness of the intestine without having to do surgery.

Treatment is directed at reducing the pain and inflammation in the intestine. Non-steroidal anti-inflammatory drugs such as flunixin (Banamine) as well as corticosteroids are typically used. In fact, some horses may have to be on steroids for several weeks to months. Laxatives such as mineral oil are used early on to help with intestinal motility. Antibiotics may be used for infectious causes of inflammatory bowel disease and cases that have low white blood cell values. Also, there is enough evidence that parasites play a role in some of these cases, so a de-worming program directed at treating encysted small strongyles is typically warranted (moxidectin or 5 day, double-dose fenbendazole).

Diet adjustments are directed at reducing bulk. Complete feeds are an excellent way to feed these types of horses because they are pelleted, easy to digest, and have the hay and fiber in them already. Pelleted hays and beet pulp may be good alternatives.

So what happened to Hemi? Hemi came home after almost a week at Pilchuck Veterinary Hospital, and was a placed on daily dose of corticosteroids for 3 weeks and started on a complete pelleted feed diet. He finally stopped having colicky episodes and, after about a month, his protein slowly started crawling back up. It took two months before his protein was in the low normal range. He lost a ton of weight in that first 2 weeks after getting sick and looked pretty rough, but slowly, with excellent feeding from April Ackerson (his owner), he gained all the weight back (actually, April got him too fat this spring, but that’s another story).

If all that wasn’t enough, Hemi got 2nd out of 100 horses in a barrel race competition only 6 months after he got sick! He can handle pasture pretty well, but she does have to be careful not to feed him very stemmy hay as he will have some low grade colic signs. This is probably from scarring in that part of his intestine. We will probably never know exactly what caused Hemi’s gut to react in this way and, unfortunately, most of these types of cases don’t have very clear answers. Prevention is the same as any other colic case: consistent diet, good de-worming practices, exercise, water, and good quality forage.