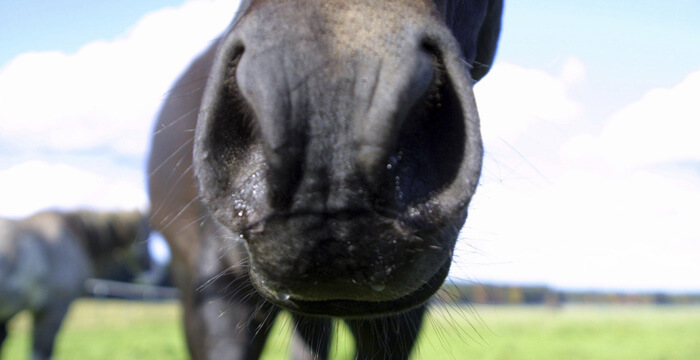 For nearly as long as horses have been domesticated, the relationship between barn confinement and respiratory disease in the horse has been recognized. This relationship is intuitive, especially when we consider that deep in the lung where the blood takes up oxygen, the barrier between the outside air and the horse’s circulation is as thin as a couple of cells.

This gas-exchange region of the lung has on average a surface area of 2,500 square meters (26,900 square feet), equal to nearly half a football field. The response of the lung’s immune system to inhaled air results in a number of diseases in both humans and horses. Many of the occupational respiratory diseases in humans are associated with agriculture due to exposures to organic dusts. Dusts in agricultural settings, including the horse barn, are rich in substances such as endotoxin and fungi that can drive inflammation.

Along the way, distinctions have been drawn between those horses that develop difficulty breathing at rest (heaves, RAO, severe equine asthma) and those that do not (IAD, mild equine asthma). While potentially leading to confusion for the horse owner, the changing terminology actually reflects improvements in veterinary knowledge.

While the term COPD was applied to reflect the obstruction or blocked airflow that can occur in severe cases, this term was discarded due to the differences with the human disease. In humans, COPD is mainly a consequence of cigarette smoke and is characterized by structural changes within the lung that are absent in the horse. While the terms “recurrent airway obstruction” and “inflammatory airway disease” are descriptively accurate, they are not necessarily terms that immediately help the horse owner to understand the disease process.

Due to its many similarities with the human disease, the term “equine asthma” has most recently been adopted. Like human asthma, equine asthma is triggered by inhalation of dusts that contain allergens and other irritants. And like human asthma, the cough and difficulty breathing can be reversed in the short-term by medications, often delivered by inhalers, or in the long-term by removal from the offending dusts.

Also similar to asthma in humans, the response of the horse’s airway to inhaled dusts can vary widely. In some highly susceptible horses, inhalation of even small amounts of dust in the barn environment or airborne allergens (e.g. pollen, molds) at pasture can cause severe inflammation and difficulty breathing due to the accumulation of mucus and narrowing of the airways. There is no known cure for these severely asthmatic horses, and they require special management for the duration of their life span.

In other horses the inflammation is milder with occasional coughing and decreased performance. Respiratory problems in these mildly asthmatic horses often become apparent only when the horse is asked to perform athletically and may resolve over time. Those horses with mild asthma do not necessarily go on to become severely asthmatic.

While susceptibility varies widely, any horse (or person) exposed to enough dust will develop inflammation in the airway. In the case of stabled horses, dust exposure is mostly due to hay. Those horses with severe asthma often require that hay be completely removed from the diet and that the horses be removed from confinement to the barn altogether.

In the milder cases, decreasing the dust released from hay by soaking or steaming may improve airway health. As soaking has a number of drawbacks, high temperature steaming is becoming the preferred method to reduce exposure to the dust from hay. At Purdue University College of Veterinary Medicine, we use a Haygain hay steamer which has been shown to reduce respirable dust by 98%.