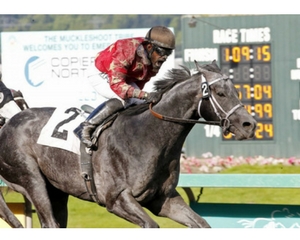 AUBURN, Wash. (May 6, 2017) – Togrammashousewego rallied from last and caught Papa Frank in the final yards for a 1 ¾-length victory in Saturday’s $20,500 allowance/optional claiming feature for 3-year-olds and up on Kentucky Derby day at Emerald Downs.

Overcoming a slow start, Togrammashousewego ran six furlongs in 1:09.34 and paid $8.60, $5.40 and $3.60 as second choice in the wagering. Rocco Bowen rode the winner for trainer Charles Essex and the ownership trio of Shirley MacKenzie, Derek MacKenzie and Donald MacKenzie.

A 4-year-old Washington-bred colt by Houseofroyalhearts-Sophisticated Slew, Togrammashousewego has yet to run a bad race in his six-race career, compiling a 2-3-0 record with earnings of $34,150, including $11,275 for Saturday’s triumph.

Last on the backstretch, Togrammashousewego gained momentum inside on the turn, swung out into the lane and collared Papa Frank inside the sixteenth pole to win going away.

Papa Frank, ridden by Eliska Kubinova, shook off Face Valued and 6-to-5 betting favorite Betrbegone past mid-stretch, but was unable to withstand the winner late and paid $5.80 and $4.

Grinder Sparksaglo, with Juan Gutierrez, also broke tardily, but rallied to finish third and paid $4.20 to show, while Face Valued, Betrbegone, Trick Or Retreat and Spit and Shine completed the order of finish.

NOTES: Bowen and Essex combined to win three races Saturday—the second with Exit Sixty Slew ($4.20), the sixth with Togrammashousewego, and the seventh with Rockport Birdie ($4.40). . .Bowen opened a 17-13 lead on Kevin Orozco atop the jockeys’ standings. . .Wine At Nine ($5.40) and jockey Matt Hagerty combined for their second win of the meet with a gate-to-wire score in race four for trainer Vince Gibson and smoking hot owners Two Putts for the Win. Composed of Dean Mazzuca and partners, Two Putts for the Win won two more races Saturday—Wine At Nine and Raging Warrior ($9.80)—and already have seven victories at the meet. . .Hagerty is 2-0-1 in thee mounts at the meet. . .With a victory on Raging Warrior, Orozco has at least one win on seven straight cards. . .3-year-old colt Riser ($4.40) was a sharp winner in his Emerald Downs debut for Blaine Wright and Chappell Alpine Farms, rolling to an easy victory in 1:02.52 for 5 ½ furlongs vs. allowance/optional claiming 3-year-olds. . .Trainer Doris Harwood saddled 4-year-old geldings Cross Creek ($12.40) and Hit the Beach to a one-two finish in Saturday’s third race for $25,000 maiden claimers. . .Live racing continues Sunday with the first stakes race of the season, the $50,000 Seattle Stakes for 3-year-old fillies with Risque’s Legacy the 5-to-2 morning line favorite. First post is 2 p.m. . .There is a $2,006 carryover in the $0.20 Pick 7.