You’ve Got One Job 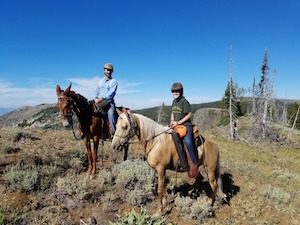 Most visits from out-of-state family don’t start with a trip to the farm supply store for clothes. This one did. 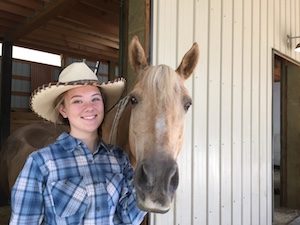 Immediately after arriving from the East Coast my 17-year-old niece Mikayla discovered western ranch culture with a new wardrobe of horse riding and barn work appropriate apparel. Goodbye skinny jeans, hello wranglers. Goodbye sneakers, hello cowboy boots. Goodbye trips to the mall, say hello to your horse, LT; he’s solid in the mountains, but likes to test his riders. “You were how old the last time you rode? Seven?”

…Well, this may be an interesting month. Let’s ride.

You’ve got one job: stay safe. What is to me a pleasant, relaxing, front country day-ride destination was less so for Kayla on her first ride in the Evergreen State. I picked the Antoine Peak Conservation Area in Spokane for its mild trails.

“This is steep,” came the plaintiff cry behind me as we headed up on what I thought was a gentle path.

“Nah, this is a good trail,” I thoughtfully explained to the teenager who was slowly curling into the fetal position behind me. I had forgotten that her last equine experience ended over a decade ago — with a fall. Kayla may have been nervous, but she was game and we had an uneventful inaugural ride.

…There may be a need for a little more saddle-time teaching to get her comfortable. 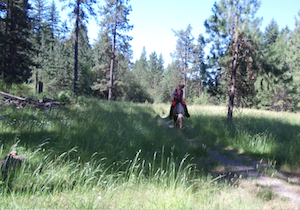 You’ve got one job: work this camera. The Blue Creek BLM area east of Coeur D’Alene, Idaho was the site of our second ride. With glorious views of Lake Coeur D’Alene far below I thought this was the perfect place for Kayla to hone her videography skills, filming Ruger and me working our way through the trails.

“He won’t stop eating,” wafted through the cool morning air. LT had her number and was happily munching his way through the lush meadows of the area.

“You just have to neck rein him, with one hand, away from the tall grass while you frame the shot on the camera,” I thoughtfully explained.

“Steer him with one hand? No way Uncle Rob. I’m keeping both hands on these ropes.” …I may need to reconsider my grand plans of having Kayla do all the filming for my video series.

You’ve got one job – get comfortable with gravity. A fairly small riding area with impressive views of Newman Lake below, the McKenzie Conservation Area has a single steepish area where Kayla could practice going up and down hills. The world looks and feels different when you’re astride a tall horse. Getting comfortable with those sensations takes saddle time. “When you’re going up or down a hill just keep your torso parallel with the trees.” 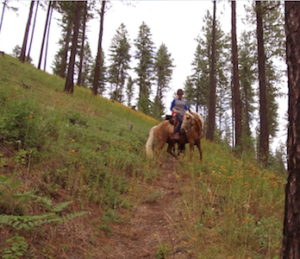 You’ve got one job: turn around. In Idaho, Heyburn’s south side equestrian area was a new-to-me riding and camping area. A fabulous set of well-marked and maintained trails was ours to explore.

“I don’t like this; it’s scary,” was Kayla’s reply when I announced that we were going to turn around while facing downhill. It also has a little bit of side-hilling where we could practice reversing to the downhill side, an important skill in case we ran into a larger group elsewhere and had to turn around. Despite the initial reluctance, high fives were in order when we got back to camp. Kayla is riding like a champ now. She’s starting to take sporty areas in stride.

…This is getting fun.

You’ve got one job: just say hello. Farragut State Park, site of a former Naval base, and once largest city in Idaho, has a large network of double and single track trails that are popular not only with the equestrian set but also for two wheeled trail users. LT and Ruger are solid mounts that take bike encounters in stride so this should be an easy ride.

“When you see a hiker or biker, give them a loud ‘hello’ and get them to respond so the ponies know they’re people, not monsters. Got that?” an overly cautious uncle queried.

“No problems Uncle Rob,” was the reply.

…And there weren’t any. 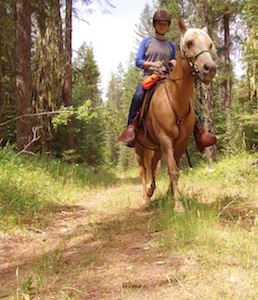 You’ve got one job: don’t be dinner. “Did I tell you that a woman was mauled by a bear here a couple of weeks ago?” I asked, delighted by my sense of notable current events. “And see this little bell I put on your cinch? It’s to let any bears know that we’re here so they have time to move on.”

“What?!” was the only response I heard, although there may have been some muttering that I didn’t quite catch. Located in Idaho’s Panhandle National Forest, Chipmunk Rapids was Kayla’s first introduction to riding in the forest. All our previous trips had been to more refined areas such as state and county parks. …Now was the time to take her into a wilder location.

You’ve got one job: love the hills. “It might be a little rocky and there could be a few steepish spots that might be sporty—you game?” I asked.

“I’m a stone cold killa; I got this,” came the reply as we headed up the slopes of Idaho’s Pee Wee Creek trail system. While I’m not sure about the colloquialism, she handled the hills better than many I’ve seen. 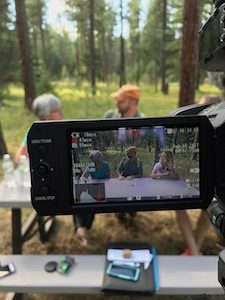 You’ve got one job: direct the filming. Home to a world class competition and riding facility, the Washington State Horse Park also has miles of excellent trails to explore for those of us less competitive in nature. After enjoying the trails Kayla masterfully directed the filming of all our show segments. “Uncle Rob, I need you to canter beside the Cle Elum Rodeo Queen while she’s carrying the Park flag.”

“You’ve got this, Uncle Rob,” says the rising film director. And I did.

…I think I’m riding with the next Ingmar Bergman. 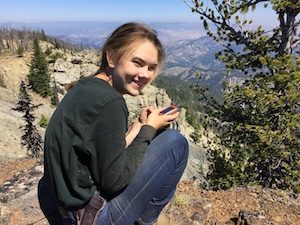 You’ve got one job: be epic and don’t fall. Haney Meadow in the central Cascades is one of my favorite riding and camping areas in the U.S. Sharing this wonderful place with Kayla will be my high point of the summer. It’s not often that you can enjoy this kind of riding and camping with your favorite people.

Kayla’s InReach messages to her parents from the trails around Haney Meadow: “I’m in the wilderness and have not died or broken any bones. Today was really good. I am currently at 5,984 ft. up in the most beautiful place I have ever been.”

…Watching Kayla enjoy this wild and high place will be one of my favorite memories. 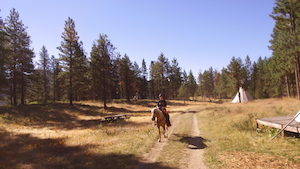 You’ve got one job: relax and enjoy that shower! The Flying Horseshoe Ranch with its fabulous hot showers, cabins, and amenities was our first stop after our visit to Washington’s high country. After setting up and directing our interview with ranch owner Penny, we enjoyed riding the mild trails of the low country while enjoying the views of the mountains that we had just left. “Hey Uncle Rob, here’s a better way to hang your lead rope from your saddle. Try this.”

…The student has become the teacher. I am proud. 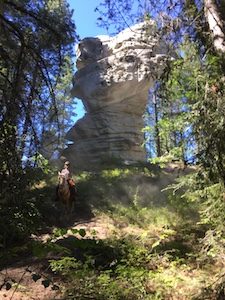 You’ve got one job: find that rock. Riding out of Indian Camp in the Teanaway Community Forest we had one goal: to find Balanced Rock. A set of coordinates with its seemingly random numbers, and a battered topographic map were our guides on this ride. Patching together random bits of double and single track with the occasional bush whacking jaunt, we headed towards this immense chunk of Eocene era sandstone that towers 100 feet overhead.

“Uncle Rob, this is nice but I like the high country better. It’s more interesting.”

As always for more information to help plan your visits to all of these horse riding and camping areas visit www.TrailMeister.com the world’s largest, and only accurate, horse trail and camp guide.

Mastering the Balance Beam
Back to Basics