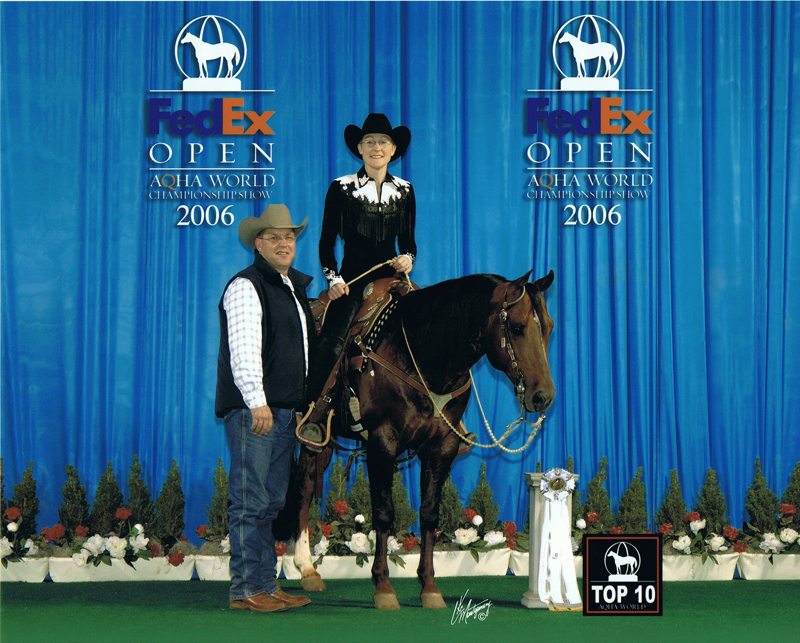 Collection. Cadence. Impulsion. Grace. Fine horsemanship reflects pure harmony in motion, the elegant execution of disciplined mastery, immediately distinguishable from basic riding.  Xenophon, an accomplished cavalryman and student of famous Greek philosopher Socrates, penned the first known book on the subject back in 430-354 BC, The Art of Horsemanship.  He wrote that a horse becomes only more beautiful with correct training, never more ugly. Colonel Podhajsky, who trained the Royal Lipizzaner Stallions for 35 years as Director of the Spanish Riding School in Vienna, Austria, observed “I would…add to this that if the horse becomes uglier in the course of his work, it is the unmistakable proof [of] wrong…training.”  Both men would tip their hats to accomplished trainer Sue Sultze.

Watching Sultze flow through a reining pattern is like watching haute ecole, the highest expression of equestrian art achieved between horse and trainer. It’s as if the two become one, her horse spiritedly achieving his fullest expression with complete collection and focus.

“I guess I’m a student of the vaquero reining horse tradition,” says Sultze. “If you don’t have the psychological piece down you can employ all the position and mechanics and still not be as effective as if you understand how the horse perceives things and thinks.”

Sultze launched Double S as a trainer/instructor operation in 1978 and expanded to their Bow location in 1995. Breeding began in 2001, with the acquisition of then two-year-old stud Key to My Cash Box, a grandson of Dash for Cash. Prior to breeding, they trained and showed Key to My Cash Box, now a recognized AQHA Superior Reining champion, with numerous championships over the years in reining, cutting, and working cow horse events. The stallion’s handsome, athletic, mindful offspring prove the apple doesn’t fall far from the tree.

“I like all Sultze’s babies, but then I’m a Dash for Cash girl,” said Roz Reinke. When she saw Hungry for Cash, “it was love at first sight!”

“Hungry’s gorgeous, super smooth and has a huge personality,” Reinke enthused. A self-described barrel racer “who really had no experience with collection,” Reinke said Sultze’s training and conditioning made her want to buy a horse from her.

“Sue taught me everything,” said Reinke. “You get your money’s worth there.”

Sultze believes training is all about making the right thing easy and the wrong thing difficult. “You have to understand how a horse thinks to train him effectively, and a lot of people miss that.”

Under Sultze’s training, Reinke learned to understand how to most effectively communicate with Hungry. She began showing him in boxing, a reining pattern used to call in a cow. “I’ve done it for two years and I placed second my first two times out and never placed lower than 5th,” says Reinke. “It’s just great fun, and it’s up to me to move Hungry up to his highest potential.” Reinke won AQHA Novice Armature Reining at Moses Lake this summer.

The demand for focused precision proves daunting to some who gain Sultze’s instruction, but no one knows better than Lori Seligmann that it’s worth the pain. “When I came to Sue in 2013, at age 63, she pushed and pushed – she was relentless in holding me to my highest potential, and it was all new to me,” said Seligman. “Frankly, I was intimidated. I was carrying around a lot of stuff at the time, and it felt as if life circumstances just kept holding me back.”

But Seligmann is no quitter. Diagnosed with breast cancer in 2010, her lifelong love of riding was cruelly interrupted. After surviving the long nightmare of chemotherapy, Seligman returned to riding a year later. Away from her care for so long, her horse Dos seemed agitated, nervous, and distrustful, but Seligman was patient and kind. “He gained self confidence, which was very personally rewarding to me,” she said. “He learned to trust me again and it helped me heal.”

In time, Seligmann decided she wanted to take her riding to a higher level. “Once you have cancer, you don’t know if it’s permanent so you have to make your dreams a reality,” Seligmann said. She took a clinic with Les Vogt, and asked him who he’d recommend as a trainer for Dos. Vogt nodded to Sultze.

Though Seligmann felt sorry for Dos, he was nervous and unpredictable so she started riding some of Sue’s horses. Soon she bought Fletch It, and started the 2014 New Year with a new horse. “In the beginning, I felt like I wasn’t a good enough rider for the horse, because it came fully trained and perfect. I needed to learn  his language and  I stuttered and stammered a lot in getting there; I had to unlearn a lot of stuff,” Seligmann said.

Seligmann showed four times in 2014, and won the Novice Reining Championship in Monroe. “I got enough points to qualify, so I set my sights on the World Championship in Las Vegas.”

Seligmann, Fletch It, and Sultze continued training until Seligmann broke her ankle playing tennis on vacation. From February 27 until June 15 she was out of commission and figured Las Vegas was out of her sights.  Sultze and Pasma encouraged Seligmann not to give up on her dream and recommended reading motivational materials.

“The Art of Mental Training really had the most impact, but they gave me the confidence to keep going,” Seligmann said.

According to Sultze, the mental part is most important. “If you don’t think you can do it, it doesn’t matter. People have to have goals and intentions. If you don’t have those things, you can muddle along forever and not get where you want to be.”

Seligmann stayed focused and her efforts paid off.  Rewarded with two top ten places at the 2015 Level 1 AQHA championships in Las Vegas, Seligmann and Fletch It placed fifth in ranch riding and ninth in reining, out of a large field of competitive riders.

“That whole experience changed my life,” said Seligmann.  “I ride with more purpose; I ride with more intention. I’m very proud and honored to be in this realm. I know I couldn’t have accomplished it without Sue and Tom.”

Jeanne Ball is a life-long equestrian, backcountry enthusiast, freelance writer, and owner of Grand Equitations, in Jackson Hole, Wyoming. Re-training horses with people problems, teaching balanced-seat riding as a foundation for all disciplines and leading backcountry equine adventures are her passions.