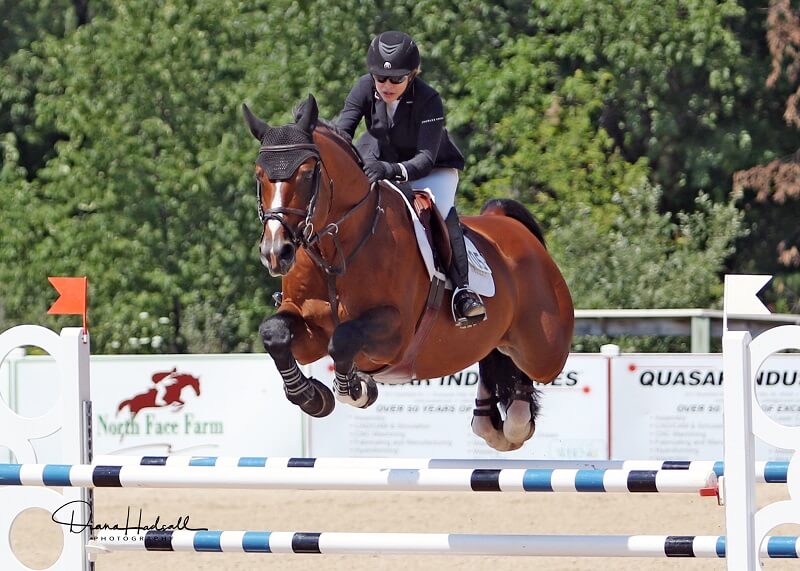 Currently sixth-ranked U.S. show jumper Margie Engle is having a 5* summer, as in top placings at CSI5* competitions throughout Europe with Royce, Dicas and USA Normande. Such summers, or, in fact, entire years, are nothing new for Margie, one of the show jumping world’s winningest riders for over 35 years.

What is new is the incorporation of Haygain Steamed Hay in her horses’ routine. When one of Margie’s top horses was determined to be “allergic to everything” last summer, Margie and her well-known veterinarian husband Steve Engle, DVM, discovered steamed hay. A popular practice with top competitors in Europe, where hay steaming was developed 10 years ago, the concept made immediate sense to the show jumping power couple.

The horse they started steaming hay for attained optimal breathing and no longer had trouble getting enough air for show jumping’s rigorous demands. “It has so many benefits for horses with allergies,” Margie explains. Along with better breathing, that horse’s allergy-related skin conditions cleared up, too. Soon, Dr. Engle suggested that all Margie’s horses start getting steamed hay as an all-around preventative measure for their respiratory health.

Margie gained peace of mind knowing her horses are getting the cleanest hay possible. “It’s so good for getting rid of toxins, dust, bacteria, and the different weeds that can be in hay but you don’t always see.” Galloping down to fences that are sometimes taller than her 5’1” frame, that kind of confidence is key. Clean hay equals better breathing, which is critical to sailing over the huge courses Margie and her horses navigate nearly every week of the year.

Margie is a veteran of the elite competition circuit governed by the International Equestrian Federation and its Anti-Doping & Controlled Medications regulations. She notes that hay steaming is a good way to reduce the risk of unknown substances in hay, which can come from weeds and other environmental sources. “Because we can’t always bring our own hay in, this is a good way to get rid of as many things as we can.”

Increased Awareness of Respiratory Health
Dr. Engle describes an increased awareness of respiratory issues among his veterinary peers. “This has been largely due to all the research that is being done in performance horses, especially in the racehorse industry, where optimal performance is equated to optimal return on investment.” One example is fiberoptic endoscopes that allow visualization of the upper respiratory tract while the horse is fully engaged in exercise. “That wasn’t possible before,” Dr. Engle explains. “Better diagnostics, such as bronchial alveolar lavage, help us determine if inflammatory or infectious airway disease is present. With more knowledge comes more awareness.”

In his view, inflammation throughout the horse’s body is the biggest performance limiter in otherwise sound horses. “This is what we seek to control in all aspects of health and disease and ultimately (and hopefully) improve performance in our sporthorses.

Haygain is doing its part. According to an independent study published in the December 2018 Journal of Veterinary Internal Medicine, feeding high temperature steamed hay reduces the risk of Inflammatory Airway Disease by 65%. A condition on the Equine Asthma Spectrum, IAD is surprisingly prevalent in horses, often with no obvious symptoms. Past studies indicated that 80% of horses have IAD to some degree: The recent JVIM-published research reported an IAD diagnosis in 88% of the 731 horses studied over three years in Europe.

Since adding steamed hay to her horses’ program, Margie is breathing easier while continuing her storied career. She has over 210 Grand Prix victories to her name, the most recent being mid-June’s victory in the CSI5* Villach, Treffen, with Dicas. She’s a 10-time American Grand Association Rider of the Year, a member of over 20 winning U.S. Nations Cup teams, a medalist at the Pan Am and World Equestrian Games, and a 2000 Olympian, finishing sixth in Sydney with the team and 10th individually with Perin.

Haygain USA is thrilled to steam power Margie’s horses, along with those of fellow top-10ers on the current Rolex/USEF Show Jumping Ranking List: #1 ranked Beezie Madden, and #5 ranked Jessica Springsteen.