A Tale of Two Rescues

Nestled in the picturesque McKenna Forest Reserve near Yelm, WA is a peaceful little plot of land named Barb Apple’s Horse Play Ranch. People often say the ranch has a special feel to it. Indeed, the horsemanship motto here is “a soft feel with people and horses.” But it’s more than a motto that makes this place special; this is a place where dreams are rescued.

2011 could be called “The Year of the Rescue.” The first one occurred in March of that year when a volunteer for People Helping Horses contacted Barb about a gelding she would later christen El Santo (The Saint). The horse was 11 at the time, newly gelded and with only 30 days of training on him. If he could talk, El Santo would have quite a story to tell.

The horse was part of a herd of Andalusians (some say Morgans) in northern Washington that had been abandoned. The man who was raising the horses was also feeding some of them to the hybrid wolves he bred. Eventually, he turned the horses and wolves out in a large pasture and left the country. The herd included two stallions, one of which was El Santo. The younger stallion challenged Santo for the lead position, beating him up badly. Authorities were finally contacted and the horses and wolves were sent to rescue facilities. Barb fell in love with El Santo at first sight and in April brought him home to Horse Play Ranch.

“El Santo and I had a special bond almost from the moment he arrived at the ranch. I think about what I want him to do, look him in the eyes and most often he just does it. He still has a strong stallion mind set at times, but because of trust and confidence he holds it in check,” says Barb, adding that the horse responds well to thought and softness, but respect is the key to trust. El Santo has become an extra special partner to both Barb and her mare, Feather.

Barb is committed to living from a place of passion and creativity, but while rehabilitating El Santo she had to acknowledge that the future of the ranch looked bleak. Due to the rainy Northwest winters and lack of a covered arena, she couldn’t work all year round. This had taken its toll on the business budget and in September of 2011 it looked as if the ranch would be closing its doors.

Just as Barb walked into El Santo’s life at a critical time, many people who had traveled to Horse Play Ranch over the years rallied in Barb’s time of crisis. An idea emerged at the suggestion of a student and soon an effort was launched to “Raise the Roof on Horse Play Ranch.” Through an email campaign, other people were invited to join the project. Within hours, friends and students from near and far began sending gifts both large and small. Most of the gifts included messages about the positive impact Barb’s teaching has had on the lives of many people and horses. In less than 6 months collected monies totaled $130,000 and the arena had a roof with covered stalls. The resulting facility was dubbed The Barn of Dreams. Today, the love and thoughtfulness of people, and the pure energy of horses, can be felt in the very atmosphere. It is a truly joyful place to be.

“Every time I step out my door and look at the barn and my lovely El Santo my heart sings with gratitude,” says Barb. “I believe that you create what you focus on most—I guess that focus rescued both of my dreams.

Barb Apple is the “cowboy without hat and chaps” and spent years learning from the best. Mentors include Pat and Linda Parelli, Tom Dorrance, Jack Brainard, Eitan Beth-Halachmy and others. Barb is now focusing her no-nonsense teaching approach to further the rider’s understanding of Cowboy Dressage™, Centered Riding®, natural horsemanship, and trail riding to name a few. Her underlying intention is to build confidence in horse and rider from the ground up. Join us for a lesson or clinic. Experience a place where dreams are rescued, one by one. www.barbapple.com 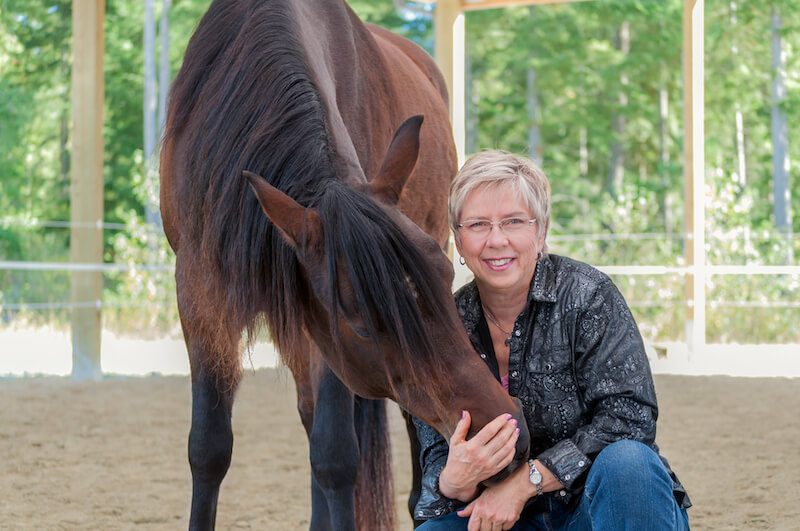 Barb Apple has a lifetime of experience with horses. She is a natural teacher who learned from the best of the best: Tom Dorrance, Pat Parelli, Jack Brainard and many others. She is an expert at helping people understand horses. Working with people and their horses is more than a job for Barb, it is her passion.

Featured at several expos around the country and in years of clinics from coast to coast, Barb and her horses have touched many hearts. She is more than a horse trainer – she’s a master horseman and instructor. Barb Apple is a master of communication, understanding the horse, and most importantly, teaching others how to fully experience their horses.