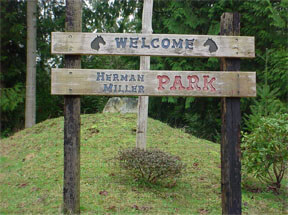 There was once a man named Herman Miller who thought it was important to provide a facility and environment for equine education and awareness for 4-H members, leaders and parents.  Herman bought the park in the early 1940’s and it was later deeded to the 4-H program in Whatcom County to manage in 1993. Herman Miller’s vision was to provide a safe place for our youth and to allow them to ride their horses away from the crowded roadways. He also believed in the 4-H Pledge: I pledge my HEAD to clearer thinking, my HEART to greater loyalty, my HANDS to larger service and my HEALTH to better living for my club, my community, my country and my world. As Herman put it, “The four H’s really sum up everything in life.”

We are celebrating the 20th Herman Miller Annual Auction on March 22nd 2014 at the expo building in the NW Washington Fair Grounds in Lynden, WA at 5:00pm-7:00pm silent auction, and 7:00pm – 9:00pm live auction(food will be available). Come support the park and help us finish what Herman Miller started. If you want to help by donating items to auction or money please contact Dani Mulbach (360)255-1525 or Sandy Olson (360)592-1123.